I have six amiibo figurines in my “collection”. Three of these I bought simply because I wanted the figures – these are the Super Smash Bros. versions of Link, Zelda, and Ganondorf. They remain in their packages, unopened. The other three are the Super Smash Bros. versions of Mega Man, Toon Link and Ike. I bought these other three with the intention of using them for their promised video game functionality – I used all three with the game that they were designed for, Super Smash Bros., and I was also looking forward to using them in other yet-to-be released titles.

Mega Man, as expected, was only compatible with the Mega Man Legacy Collection which I didn’t get a copy of. Toon Link was disappointing; the next couple of The Legend of Zelda games released for the Nintendo 3DS did not have any amiibo functionality (Majora’s Mask 3D, Tri Force Heroes) and I didn’t get a copy of the title that did (Hyrule Warriors Legends). Ike though, provided good value for it’s cost – I was able to use the figure in all Fire Emblem Fates games (I have the three-in-one Special Edition) and will be able to use him in three more titles: Code Name S.T.E.A.M., Fire Emblem Echoes, and Fire Emblem Warriors.

Despite Nintendo releasing more amiibo figurines for franchises that I’m a fan of (two more Fire Emblem amiibo, more than a handful of the Legend of Zelda amiibo), I’ve never once considered getting them. The only amiibo figurine that I’ve considered purchasing is another one of the initial Fire Emblem amiibo that was released for Super Smash Bros. (Robin) and that’s because I can use that figurine in multiple titles. So far, only this Fire Emblem line and the Super Mario Bros. amiibos have been compatible with multiple 3DS titles – the rest have been disappointing in terms of the number of games that they’re compatible with and how they are being used.

The initial Super Smash Bros. line of Fire Emblem amiibo have some of the best uses of amiibo thus far.

I’m very happy with my Ike amiibo figurine – again, this amiibo has and will continue to give me a lot of bang for the cost of my initial purchase. But I regret purchasing both my Mega Man and Toon Link amiibo. Perhaps Toon Link will be much useful once I get my hands on a Nintendo Switch and Breath of the Wild.

Nintendo recently announced what each of the Metroid amiibo will do for the upcoming Metroid: Samus Returns for the Nintendo 3DS, and people have been up in arms over this. So that everything is clear, let me get into further details:

At first glance, I didn’t see anything wrong with this; I have Metroid Prime: Federation Force but do not have either of the Smash Bros. Samus amiibo so I have no way to access the special costumes that they unlock. Not being able to access those wasn’t a dealbreaker as I had access to everything else that the game had to offer. 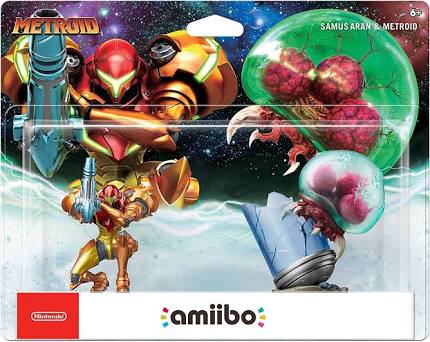 Owning these two amiibo figurines won’t be enough to unlock everything in Metroid: Samus Returns.

Some of the unlocks for Samus Returns though are features that are more than just cosmetic improvements or advantages in the game; I know that there are people who actually enjoy looking at concept art or listening to the game’s music. More importantly, a different difficulty mode is a feature that adds to a game’s replayability, and more replayability means more bang for your buck.

Looking at the big picture, if someone wanted to access all the features/modes of Samus Returns, that person would have to get all four Metroid amiibo. If we only look at Nintendo’s SRP for amiibo figurines, we’re looking at $12.99 for separate figures and $24.99 for “two-pack” bundles. That’s a total of $50.97 – and we’re not even considering scalpers here! 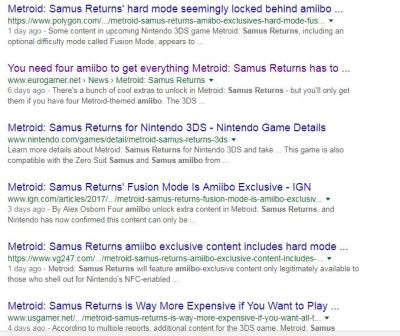 News of the amiibo functionality in Metroid: Samus Returns made the rounds last week.

Metroid: Samus Returns is a guaranteed purchase for me; I loved Super Metroid and Samus Returns is the direct prequel to that title. As someone who will get the game, I don’t mind missing out on the BGM player or the additional art unlocks. I don’t think I’ll need the extra tanks; they’re a big help but I don’t think they’re necessary. But the Fusion Mode is a mode that I do want to play, and it’s a bummer that I won’t be able to play it without the Metroid amiibo figurine.

I’m already talking like I’m not going to buy that Metroid amiibo, because I’m probably not. So far, it’s only compatible with Samus Returns (no word on whether it will be backwards compatible with Metroid Prime: Federation Force) and it is bundled with the crouching Samus amiibo (I’m forced to shell out money for two figurines instead of one). And even if I did want to buy it, there’s no guarantee that I’ll be able to get my hands on one – Nintendo has been known for their supply issues and it looks like these pair of amiibo will be highly sought after.

It’s hard to make sense of what amiibo should really be. Are we supposed to look at these figurines as products for the toy collecting crowd that offers in-game rewards? Are they video game pheripherals that are for hardcore Nintendo fans who want to get the most out of Nintendo’s games? What should these figurines be doing, video game-wise?

Again, I’ve never bought any other amiibo because they aren’t that useful to me. I never bothered getting any of those NFC cards for Mario Sports Superstars (I could play and enjoy the game fine without them and can unlock whatever they unlock with time and effort). Despite enjoying Shovel Knight a lot, I never had any desire to get the Shovel Knight amiibo.

The first batch of Fire Emblem amiibo, though, offered something really good. Being able to recruit Ike as an AI-controlled partner in Super Smash Bros., as a unit in my Fire Emblem Fates (permanent), Code Name S.T.E.A.M. (permanent), and Fire Emblem Echoes (temporary) armies is a big plus. And it doesn’t end there – we have yet to learn what this amiibo will do in Fire Emblem Warriors.

Nintendo has, from what I can see, three problems with their amiibo: (1) How do they determine exactly the demand for their different lines of Amiibo and produce adequate supply, (2) What kind of features will these unlock that will make customers (and not just the toy collector crowd) want to buy them and (3) How do we avoid alienating those who do not want to/cannot buy these amiibo figurines?

These are tough problems. As it is currently, I can see why some Metroid fans are pissed; not being able to play an entire mode of gameplay in Metroid: Samus Returns is definitely a bummer. The game is scheduled for release this coming September; I’m not sure if Nintendo still has time to change how the Metroid amiibo will work with it. Looking to the future though, if Nintendo continues to make the same mistake, locking too many wanted/needed features of a game behind amiibo, this may result in fans souring on these figurines. I’ve got some ideas and recommendations for amiibo moving forward that may resolve these problems – stay tuned for these next week.

What do you think about the amiibo and their game unlockables? Share your thoughts with us by leaving a comment or two below!