There’s a problem when you set your expectations high on something in the future. Most of it deals with hope and the promise that something will be incredible and fantastic. You fantasize about how good that thing is going to be and every thing about it will be just peachy keen. This is how I felt when I heard that SEGA was making an English version of Valkyria Revolution, a spin off of the amazing strategy RPG, Valkyria Chronicles. The very first Valkyria Chronicles was, well, a revolutionary game (pun intended). It had a phenomenal art style and the battle system was great. Each and every unit in the game felt useful for specific situations so planning out your campaign before entering a mission was essential. It also had an engrossing story and well developed characters. So, of course my expectations for Valkyria Revolution, the only other game to be released on a home video game console was sky high.

But, like I said, setting your expectation high can be a problem. Valkyria Revolution just wasn’t as good as the latest entry to SEGA’s Valkyria series as I wanted it to be. With that being said, however, I have a feeling that I would feel the same way about the game even if I didn’t set the bar really high. Sadly, that’s because Valkyria Revolution is not a good game on so many levels, making my disappointment with it all the more amplified.

Valkyria Revolution’s story is, at least, presented in an interesting way. It’s framed in a discussion between a history student and his professor. The student has been doing some research regarding The Five Traitors from 100 years ago who started the Liberation War between Jutland and the Ruzi Empire just to enact some kind of revenge. He also found a few discrepancies between the history books and some facts he’s dug up. He’s also started to question as to why The Five Traitors were granted their request to be buried in their birthplace after their execution by the then princess of Jutland, Princess Ophelia. It just so happens that his teacher, who’s great-great grandmother knew the Five Traitors personally, knows of the actual events that happened during the Liberation War and she proceeds to tell him about the true history of what happened then.

Now, I will say Valkyria Revolution’s basic story premise is rather intriguing. The idea that five people managed to engineer a plot to wage war on an entire country for some reason would actually make for a good movie. Heck, I’d watch it! The problem is the way the story is presented. There’s just no passion in the way it’s being told and the reasons why this happened is because, well, everything about Valkyria Revolution’s visuals is just lazy!

First, let’s go look at the character designs and models. There are only a few characters that actually look interesting but everyone in general look so generic. It’s like you’ve seen them in every Japanese RPG but with all of the personality sucked out! You have the stoic soldier who’s super serious and carries a sword that’s as big as he is. You’ve got the waif-ish and righteous princess who joins the battlefield. You’ve got the veteran solider who loves to drink. You’ve also got the pompous rich jerk who incredibly vain. There’s also the prince from a rival nation who joins the side of evil for some unknown reasons. There’s the femme fatale with breasts so big you’d swear she’d topple over if she even tries to take a step. And so on and so on. 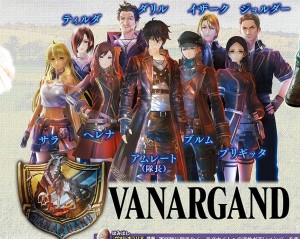 Nope, this isn’t a cheap knockoff of Attack on Titan. It just looks like one.

The animations are also pretty terrible. You would think that in 2017 the guys over at SEGA would be able to make the characters move a little more fluidly. Instead, we got incredibly stiff canned animations; the kind you would expect from 1997! There are times when a cutscene would play and I would think that these character animations were straight from a game like the original PlayStation console, not something as advanced as the PlayStation 4 or the PS Vita. Oh, and did I mention that these cutscenes are incredibly long? Now, I wouldn’t mind lengthy cutscenes if they actually looked good, but they’re mostly poorly animated short movies.

Yes, it’s that bad and it looks incredibly ridiculous to see all the characters move like robots. When they turn around in the cutscenes, they turn and move like tanks much like in the original Resident Evil. Their running/walking animations are also have that weird jerky start as if they didn’t bother to insert and transition animation from “standing” to “walking.” They use the same minimalist mouth movement either when they’re talking, whispering or shouting. But the worst thing about these cutscenes is that hardly anything moves! Most of the time, it’s just the characters standing or sitting in a circle talking to each other, with everyone barely moving at all! It just comes off incredibly lazy, much like one of the characters in the game. Heck, maybe she’s the one who was assigned to do all the animating.

Speaking of Jutland city hub, this is where you can trade items, upgrade your equipment and, if you’re lucky, talk to some of your squadmates to get to know them better. Unfortunately, this is also poorly implemented as there’s no tutorial to teach you these things. There is a quick blurb that’ll pop up and give a short explanation on what you can do but these quick snippets just lack detail. It would’ve been helpful if SEGA at least gave you a tutorial on what to do. For the first few hours, I was just running around and experimenting with the game’s features and it took me a while to figure out how to upgrade all the characters’ mana abilities and create new gear for them.

Now, if you played any of the previous Valkyria Chronicles games, you might be asking, “Why is there mana in Valkyria Revolution?” Well, be ready for a shock because Valkyria Revolution veers away from the fantastic strategy gameplay the previous Valkyria Chronicles games had. Instead, you have a weird hybrid action-RPG that’s more focused on hacking and slashing your way through soldiers. Honestly, the actual fighting system isn’t too bad. There are some odd gameplay elements, like having to wait for a while before you can perform another action ala the Active Time Battle system of Final Fantasy, but it does feel hackneyed for the most part.

The biggest problem with the battle system isn’t even that you have to wait before you can attack. Valkyria Revolution’s biggest issue with the hack-and-slash gameplay is the stark imbalance between normal foes and bosses. You can mow down regular soldiers with relative ease with your regular melee attacks and you can swiftly take down groups of enemies with a well placed grenade toss or the appropriate magic spells. Boss battles are another story, though. They can take a huge amount of punishment if you don’t know what you’re doing. They can be incredibly problematic later on as they have such high HP, it can take around 10 to 20 minutes just to defeat them. Once again, this wouldn’t be a problem if there was a little more strategy involved but it mostly you needed to pummel them with attacks until they eventually die. It’s fun at the start but becomes incredibly tedious at around the 10 minute mark.

Despite the game’s problems, Valkyria Revolution does have some good elements. The actual gameplay, as a whole, isn’t half bad. Despite having to wait before you can attack, you’re not helpless as you can still block and dodge attacks. You can also switch between your squadmates so you don’t actually have to wait. There is also a layer of strategy in the battles as certain enemies have particular weaknesses you can exploit for added damage. It can be frustratingly repetitive at times but it’s fine. The overarching story is actually pretty good; it’s just poorly relayed to the gamer because of lame cutscenes.

But the best thing about Valkyria Revolution would actually have to be its soundtrack. The music is pretty well made as each background tune has a certain grandness to it. The opening song has a feeling of epicness and grand adventure to it. The battle music also does a good job of getting your blood pumping. However, the best song, in my opinion, would have to be Claudius’ Ambition. It’s the song that plays whenever you see a cutscene set at the Ruzi Empire. It kind of sounds like a more serious version of Star Wars’ Imperial Match. But, even though the music is good, it just doesn’t come off as memorable. I don’t think I’ll be humming it years from now like Final Fantasy VII’s One Winged Angel.

To be fair, the game isn’t as terrible as I make it out to be. Valkyria Revolution is just a little below average since it looks dated even if it was just released this month. It’s not terrible nor is it great. It’s just disappointing because, well, I expected so much more from the franchise. SEGA can say that the game is that way because it’s just a spinoff from the main series. But that’s a poor excuse because fans have been waiting for another Valkyria game to be released on current generation video game console for almost a decade now. The game just feels like a mediocre attempt of making another franchise and slapping the Valkyria name on it, hoping that their love for the franchise will make the buy it, despite how poorly its made. It definitely wasn’t made withthe same care the earlier Valkyria Chronicles games got. If it was SEGA’s goal to expand the franchise in a different direction, well, they failed spectacularly.

Hopefully, SEGA will forget about this game and give fans what they really want: a remastered version of Valkyria Chronicles 2 and 3 on the PlayStation 4.

Have you played Valkyria Revolution? What do you think of it? Let me know in the comments section below!

One thought on “I’ll Review Anything: Valkyria Revolution”