Less than four years ago, Nintendo announced the coming of the Nintendo 2DS – a budget version of its current handheld gaming device, the Nintendo 3DS. It was cheaper, did not have the 3D viewing functionality that the 3DS was famous for, and did not have the clamshell design that Nintendo handhelds have sported since the Game Boy Advance SP.

The Nintendo 2DS was, dare I say, a great idea – it was an affordable way to get onto the 3DS bandwagon and did away with 3D which was a concern for some parents. Due to budget constraints, I’ve always been a generation or two behind when it came to video games, but thanks to the Nintendo 2DS I was able to enjoy the current generation. And I’m not alone in this – I don’t have actual sales figures so all I can talk about is what I’ve been able to personally observe and here’s what I can say: I know a handful of people who would not have bought and played 3DS games if not for the Nintendo 2DS. I see people who own the Nintendo 2DS in Pokemon tournaments, gaming and anime conventions, and even StreetPass meet ups. I even know a guy who, not only owns a 2DS but also bought his two sons their own 2DS units. So, despite all the cries and complaints that current 3DS owners had when the Nintendo 2DS was first announced, I can say that releasing that model was a great idea. 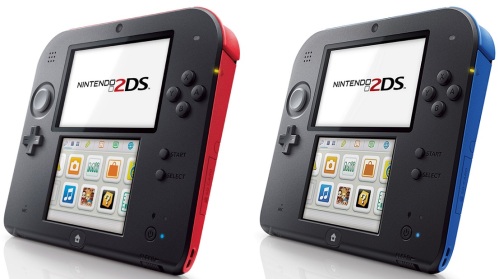 The original North America launch colors of the Nintendo 2DS. Mine was the blue version.

Fast forward to today. I’m now the proud owner of a New Nintendo 3DS XL unit, but I still have my original Nintendo 2DS. I still recommend the 2DS to anyone who is interested in 3DS games but doesn’t want to shell out the money for the pricey New Nintendo 3DS XL. But the 2DS is not as easy to recommend as before – the slate/slab design was (I hate to admit this) an eyesore and really impacted it’s portability. And knowing that the 2DS is underpowered and lacked some features made it a tougher sell.

Despite being a great idea on paper (to me at least), people have been reacting negatively to the announcement of this new 3DS model. And I don’t understand why. I mean, clearly the New Nintendo 2DS XL isn’t for people who already have a New 3DS. To be specific, the New Nintendo 2DS XL is for people who want to get the new version of the 3DS but aren’t willing to pay $200 for it, while at the same time disliking the cheaper 2DS due to feature limitations or it’s form factor.

There are some who think that the New Nintendo 2DS XL will just be a competitor for the Nintendo Switch, but is that really going to be the case? The thing is, the game libraries of both systems are quite different from each other and the Switch is not backwards compatible with the 3DS. Anyone who is considering a Nintendo handheld is probably thinking about what games to play, and that means anyone who is still considering a 3DS and not a Switch is looking at the titles that are available on the 3DS – games like the main Pokemon games, Monster Hunter, and so on.

One valid point though – keeping the 3DS alive means continuing to develop software for it. That means allocating time and resources that could have been spent on developing games for the Switch instead. The Switch has been selling well since it’s launch but so far it’s library has been really bare, with only two major titles for it available at this time (The Legend of Zelda: Breath of the Wild and Mario Kart 8 Deluxe) and not a lot of major releases coming in the near future. I just hope that the revenue gained from extra 3DS sales is worth that development time that could have been used to add to the Switch game library.

With that said, the New Nintendo 2DS XL is one last attempt at getting as many 3DS sales as possible before the console is finally put to pasture. And just by looking at how the Nintendo 2DS and the New Nintendo 3DS was received, it really looks like there are more sales to be had. The New Nintendo 2DS XL serves as a middle tier option that performs as good as the top of the line models with only the 3D functionality missing so I’d imagine this to be very attractive to those who are still considering getting a 3DS. So to anyone who is still in disbelief at Nintendo releasing the New Nintendo 2DS XL, chillax – there is a market for this device, it’s just not for you.

What do you think about Nintendo’s New Nintendo 2DS XL? Let us know how you feel about the newest addition to the 3DS family by leaving a comment or two below!