Unlike previous years, I would hold my month long look at burgers on September or October because they were the first months that end with “ber.” But, it turns out I’ve been holding Burger Month on the wrong time period because there really is a Burger Month and it’s celebrated every May. So, I decided to hold the festivities on the same month as the rest of the world. However, it’s for this very reason as to why I nearly forgot to do it.

Thankfully, celebrating a month long love affair for burgers is getting easier and easier as the years have gone by as there seems to be a lot more places that do serve my favorite food. I really don’t have to look as hard as I did in previous years. But, as much as possible, I do wanna go to the places that specialize with the product. In fact, I just so happened to stumble upon this week’s burger. Okay, “stumble upon” is a weird way to put it as Pound by Todd English’s main dining area is smack dab in the middle of Megamall’s Fashion Mall section. It’s kind of hard to miss. 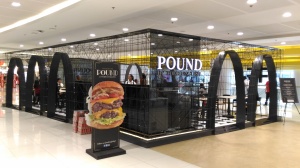 I will say that I actually like the look of the place, even if the main dining area is out in the open. I guess if you’re the kind of guy or gal that likes to say “Hey! Look at me eating the fancy burger!” you’ll enjoy eating in that place. I wanted to give eating there a try but the place was full because they were having a $1 special on select items at the time. So, I decided to eat at the less conspicuous section that houses the kitchen area.

Of course, the biggest decision I have to make whenever I do order something for Burger Month is what burger I should actually get. After perusing the menu, I chose the regular sized T. E. Burger for two reasons. One, I’m assuming that “T. E.” stands for “Todd English” so that would be their “standard” burger they serve at Pound. And two, well, while I was curious about the two sliders, I wanted to make sure that I got the complete experience with the T. E. Burger and not be disappointed if it turned out the sliders were just bite sized burgers. Oh, and on the side, I got an order of Truffle Fries, which was part of the $1 specials. 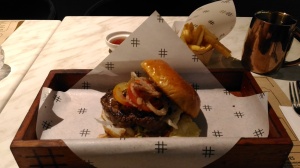 Not your standard burger and fries combo?

I will give credit where credit is due as, even though the “outdoor” dining section was packed, I got by T. E Burger and Truffle Fries lickety-split. I would think that I got it in maybe around 5-10 minutes after ordering. I’m not really sure but I have a sneaking suspicion that I may have gotten my order much faster than the people out there since I was closer to the kitchen? I don’t have any proof about that but maybe that was a factor.

Taking a look at the T. E. Burger by itself, I do have to say I was rather unimpressed with its size. I do like the overall look and I loved how neat the lettuce, burger patty, fried onions and various sauces were layered in between the brioche bun. However, the T. E. Burger was a bit disconcerting. When you’re ordering from a burger place named Pound, you kind of expect something to look a little more of the hefty side. 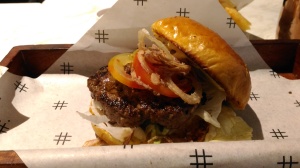 Not exactly huge, is it?

However, as the old saying goes, size doesn’t matter. And that’s certainly true for burgers… well, it does matter a little. But what matters more is the flavor. Even if a burger is diminutive, it won’t matter if it tastes great. I will say that the T. E. Burger’s meat patty was really juicy. The instant that I bit into it, there was a lot of lovely meat juices dripping down the side of the burger. However, even if it was really juicy, the patty was a little bit bland. It wasn’t terrible and it was still flavorful to a point. But it was kind of like Pound was relying on the two sauces to give the T. E. Burger the zing that it needed. Like I said, it wasn’t bad and nothing a little salt wouldn’t fix.

I will also have to make a quick comment about the brioche bun. I do like that it managed to keep its shape throughout the entire time I was eating the T. E. Burger. It actually held up really well despite all of the juices and sauces from the burger. It also managed to keep its crustiness throughout the bombardment of juices. However, the crustiness of the brioche bun is a double edged sword as it did taste kind of dry. 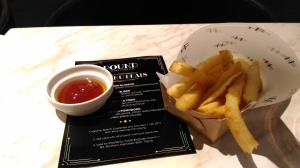 I wouldn’t really know what a “truffle” tastes like but I do know the potato slices were coated in truffle oil. Still, I couldn’t really tell you if there was a truffle flavor. However, I will say that the ketchup did have the same truffle oil and I could at least taste the tanginess if you dip the truffle fries in the ketchup. It did enhance the flavor and made these really good fries even better.

Overall, Pound by Todd English’s T. E. Burger was pretty good but wasn’t incredibly great. The truffle fries were great, though. Would I go back to Pound again? Positively. It has a good selection of burgers and I would actually like to see what else they offer.

Have you tried Pound by Todd English’s T. E. Burger? What did you think of it? Let me know in the comments section below!