Let’s face it – no matter what Nintendo says, the release of the Switch is one of the first nails on the coffin of the 3DS. Sure, Nintendo isn’t going to kill the 3DS right away; it’ll continue to get major game releases this year and maybe even the year after, but it’s dying. And that’s fair, considering that the 3DS has been out since 2011 and is clearly an outdated piece of tech. This is its sixth year, and that’s saying a lot given the pace of technological advancements.

Still, despite being technologically superior, there are some things that the Switch won’t do, a few features that it doesn’t have, that the 3DS can or has. As my way of accepting this inevitable changing of the guard, let me talk about my favorite 3DS features and capabilities that I’m sure to miss when I finally make the “switch” (pun intended).

A feature that each of Nintendo’s handhelds since their first next gen device, backwards compatibility isn’t something that I enjoy nowadays. But it really helped me a lot during the first year, and especially during the first three months of me being a 3DS owner. The 3DS wasn’t just compatible with DS games, it was compatible with physical DS media. So when I first got my 3DS, I either borrowed DS games from my friends or bought used ones at cheap prices. I wasn’t pressured to buy a bunch of 3DS games right away. 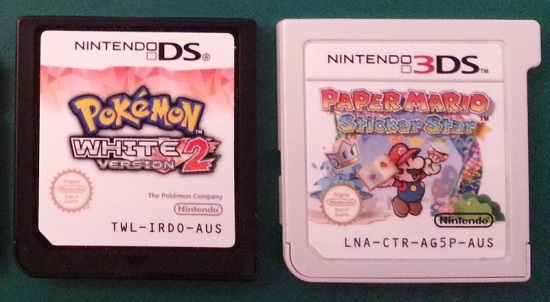 DS and 3DS cartridges are almost exactly the same physically, allowing them to fit in the same slot.

I understand why the Switch isn’t backwards compatible with 3DS games (at least, not with physical cartridges), but there’s no denying that I would have been a guaranteed early adopter if my 3DS library of 30+ titles would have been playable on the Switch.

I love the 3D viewing capability of the Nintendo 3DS. The upgraded New Nintendo 3DS, that is. There’s no other way to say it – the 3D visuals really make a game’s graphics “pop”. I love turning the 3D on for games like Super Street Fighter IV 3D, Mario Kart 7, and Star Fox 64 3D.

But I understand why I’m in the minority when it comes to this. Nintendo’s first 3DS devices had the fatal flaw of needing to be viewed at a specific “sweet spot” in order for the 3D effect to work properly, resulting in people simply turning the feature off. It wasn’t until years later that Nintendo improved on the feature, but I think it was too late by then.

Even with the improved technology, glasses-free 3D requires good eyesight in order to be appreciated. I asked some friends who owned a New Nintendo 3DS and they didn’t like the 3D feature. I showed my New Nintendo 3DS to my non-3DS owning friends and they also didn’t like the feature (ironic how the hardcore gamer in our circle is also the one with great eyesight) because the images were blurry to them. Stereoscopic 3D is seen as a gimmick by most, and it’s certainly not a necessity in order to play games. But I liked it a lot, and I’m sad to see it go.

More than a decade ago, when a friend of mine told me about what was then Nintendo’s new handheld gaming device, I thought it was silly. Two screens for gaming? Why would anyone want to have two screens when one screen would do fine? I thought the Nintendo DS was gimmicky and skipped that generation of handheld video games.

But then I got myself a 3DS and saw how handy a second screen could be. Essentially, it served as a screen for all the game information that you don’t necessarily need all the time, but may need to see every now and then. Right now, I love how the second screen shows maps for RPGs like the Tales of the Abyss 3DS remake: 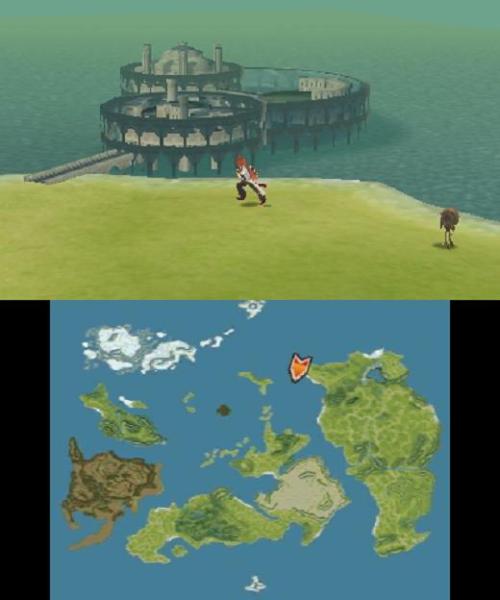 There’s no need to pause or zoom out just so I’d know where in the world I am. This map functionality isn’t limited to RPGs, but also works for games like Metal Gear Solid 3D or Resident Evil: Revelations:

Needing to pause your game just too look at a map does take away from the immersion. I’ve played games wherein the map is available on the main game screen, but it ends up being graphical clutter if it’s too big, or not as useful if it’s too small.

The second screen even works great for a racing game like Mario Kart 7:

Aside from a graphic showing you your current position in the race, the main screen of Mario Kart 7 is clutter-free. If you need a better view of the race track, see where the positions of the other racers are and if they’re holding special items, or need race info like current lap, all you needed to do was to glance at the second screen of the 3DS.

The second screen of the 3DS can function in a lot of other ways. It’s very useful and has improved my gaming experience. The Nintendo Switch has a bigger and better looking screen, but it’ll never compare to the flexibility and usefulness of having two separate screens. I’ll definitely miss having a second screen a lot once I make the “switch”.

I wrote about the StreetPass feature of the 3DS here so read that for a more detailed description. In a few words, StreetPass enables different 3DS units in the same area to exchange game data. This game data is used in many different ways: allows you to battle other players’ armies in Fire Emblem Awakening and Fire Emblem Fates, gets you a player’s fastest times in Mario Kart 7, unlocks different swimwear in Senran Kagura 2, exchanges high scores in a lot of different games, and so on.

Transferring game data just by passing by other people is another one of Nintendo’s underrated innovations.

StreetPass provided the opportunity of in-game benefits, requiring only that you go venture into the outside world with your 3DS. Some games had such good uses for StreetPass (ahem, Bravely Default) that I was actually driven to do exactly that. And when I did, I gained what is probably its best “feature” – it gave me an opportunity to meet new people, fellow 3DS owners who I had shared similar tastes. Yes, because of StreetPass, the 3DS gave me something that no other gaming device was able to give – a set of new friends. Not online buddies, but people with whom I actually started to hang out with in real life!

Why didn’t Nintendo include StreetPass functionality in the Switch? I’m not entirely sure. Maybe they want to save battery life. Maybe it’s because there are only a few game developers who made good use of it. It’s probably because the Switch doesn’t have a standby mode. Of all the features that I talked about here, I’m going to miss StreetPass the most. Not having this feature means that I’m probably not going to bring the Switch with me as often as I did my 3DS.

I don’t mean to knock the Switch. I know it’s going to be an awesome gaming device, and I’m definitely going to get my hands on one in the future. But there’s no denying that I’m going to miss the Nintendo 3DS a lot, once I retire it completely.