Last week, I wrote about how some actors and movie producers complained about how the new rules for qualification to enter this year’s Metro Manila Film Festival. I talked about how it seems like these people just focused on box office success instead of actually making sure that the quality of the films are of high standard. Beauty may be in the eye of the beholder and apparently a lot of people needs their eyes checked as the previous years have had really crappy movies! I understand how movies enable most people to escape their dreary lives for a couple of hours. But that’s the kind of thing that can be done throughout the rest of the year. It certainly doesn’t have to be done when you have a film festival!

But this attitude is certainly troubling. Although the quality of the films for this year’s MMFF are now held to a higher standard, the problem is that the majority of the movie going public here in the Philippines may not actually go out to watch these films. They’d rather watch the usual trashy films they’ve gotten used to. It’s hard to really blame most of them as, well, these movies don’t really ask that much from their audience. The general public just gobbles them up! It’s like how a lot of tween girls became so obsessed with the Twilight books and them having to choose between a fictional aloof vampire and an almost always shirtless werewolf. It’s just something they like!

Yeah, I know your reaction to this: EEEEEW!

For the first time, I was actually worried about the box office success of the MMFF because I did think that the committee made a great decision in trying to make sure that the films included were of high calibre but the total opposite of what mainstream Philippine audiences are used to. So, I did something I don’t generally do during this time of the year: actually go to the cinemas!

I was going to go out on Christmas day itself with my family for lunch (a totally separate annual tradition I have in my household). Like every year, we went to a mall called Rockwell Power Plant for Christmas lunch. Power Plant is actually one of the more posh malls in the Philippines. Most, if not, all of the items being sold there are all branded and imported stuff. This means the clientele of Power Plant are more well-to-do in general. These are, coincidentally, the kind of people that have been complaining about the previous quality of the previous years’ MMFF films! So, would these very same people that complained about the poor quality of the MMFF in the past come out to support the better made films? I had to see! 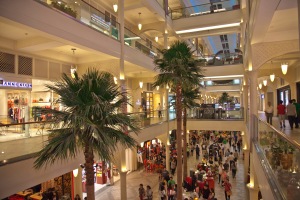 It’s the only mall I know that has palm trees inside!

I will say that, even though Power Plant is a rather hoity toity kind of mall, there are a lot of movie goers that actually go there to watch movies, even during the MMFF. It can get rather crowded in the cinema area around this time. Not as crowded as, say, the more accessible malls, but they would pull in a decent number of people. At least the entranceway to the cinemas would be filled with people anyway.

After the lunch, I moseyed my way to the movie houses just to check up on things. I will say I was rather crestfallen when I saw the low turnout this year. I was optimistic that there would still be a good number of movie goers eager to see these new breed of high quality films, the direct opposite of what these people hated. But no, this year, the Power Plant cinemas were dead. The usual hustle and bustle wasn’t there. I was glad to see that Saving Sally, the movie that I actually want to see have a good number of seats taken, but it’s definitely a far cry from the almost standing room only the more mainstream entrants get.

So many empty white seats…

I wasn’t able to actually watch Saving Sally then because that would mean I would lose my ride back home. I already made plans to go watch it at Megamall, one of the more popular malls in the Philippines the next day anyway. It would be a much better gauge on how many people are actually going to see this year’s movies as Megamall caters to a more eclectic market. This is fancy talk to say that the upper and the lower class go to Megamall.

Anyway, the next day, I was eager to go watch Saving Sally. But, at the same time, kind of depressed as it seemed like a lot of people are dismissing the MMFF even after they went through the trouble to try to elevate these year’s quality. So, imagine my surprise to see that the cinema lobby of Megamall was crawling with people!

The crowd wasn’t the usual sea of people trying to see all the movies but it was definitely much more than the number of people I saw at Power Plant. There was an actual line of people trying to buy tickets! And, I have to admit, that warmed my heart just a little. This was the first ever Metro Manila Film Festival that I actually cared for. I wanted it to be successful to any degree because it really wouldn’t matter if the films were any good if no one actually went out to watch them. So, seeing a good number of people actually buying a good number tickets is a good sign.

Better than expected at least

I don’t think that this year’s Metro Manila Film Festival will break any box office records like last year. I think the MMFF committee actually lowered their expectations this year. Their change and focus on quality was a big risk and I do have to applaud them for not playing it safe. I do hope they keep this trend up because, if someone as jaded as me when it comes to local films actually made me excited to see any of the films they have to offer, well, that’s a good sign for the future of movies in the Philippines.

Speaking of changes, as we’re moving from 2016 to 2017 next week, I might as well talk about some of the changes I think I’m going to take this blog. See you then!

Have you seen any of the films from this year’s Metro Manila Film Festival? What did you think of them? Let me know in the comments section below!