In the 2013 Matt Damon sci-fi film Elysium, viewers were made to introspect and consider the following premise: in the future, humans have conquered disease, and even death. A few minutes inside one of their healing capsules, and everything from the common cold to congenital blood illnesses, and even the natural aging process, can be “fixed” instantly. However, as can be expected, the trade-off is the need to control overpopulation, and to address this obvious problem, politicians have restricted access to these amazing machines to the Earth’s elite class – the super-rich, ultra-smart, class-A residents of the eponymous space habitat. Meanwhile, the rest of the dystopian mankind lives in utter squalor and poverty on planet Earth.

Enter Max Da Costa (Damon), a man on a mission to trespass into the facility to gain access to the healing machines for initially personal reasons. Despite the coolness factor of the exoskeletons – very reminiscent of slightly lower-tech Ironman suits – it is clear to anyone paying attention to the story that the question is not so much whether Matt Damon’s action-packed struggle to infiltrate Elysium will succeed, as it is whether it should – after all, if the technology does fall into the hands of the unwashed masses, it could mean the end of the human race altogether. In the end (spoiler alert!), Max gets killed, but he succeeds in registering all of Earth’s land-based residents into the Elysium’s citizen database, making every single one eligible to receive treatment by the machines.

As a Matt Damon fan and normal human being, the ending gave me the usual warm and fuzzies, but the more logical, practical side of me knew that the happy ending cannot be happy for long. In fact, I keep waiting for a sequel, one where the Earth is completely used up and simply not able to support legions and legions of humans who don’t die.

Consider this – a machine that can cure all diseases and reverse the aging process is nothing short of god-sent for anyone whose personal lives and families have ever been torn apart by illness and death. But can the humans race and ultimately, the Earth – handle the consequences of such technology?

These are the types of questions head writer Charles Brooker, and the producers of the British science fiction TV anthology Black Mirror dare to ask its viewers. More generally, each of the 45-minute episodes in its three seasons forces you to answer the question “The future is here/near – are you ready for it?”

In most of these stories, the “future” does not even need to have anything as fancy and far-fetched as fully adaptive steel suits and miracle machines. In Nosedive (Season 3, Episode 1), humans walk around carrying a device the size of a smart phone, in order to be able to “rate”, as well as be rated in, all meaningful interactions with other people. These interactions include anything from random elevator encounters to photos posted in social media pages to services given and received at restaurants, airports, hotels, etc. A person’s average star rating pretty much determines their place in society. A higher rating means a preferred status in getting the best jobs, apartments, and even partners. At one point, the protagonist, in a series of unfortunate events, fell in to the rock of bottom of personal ratings, and could not even rent a decent car. Rewinding to present-day, this reminded me of how car service Uber manages a hidden rating system for its customers. Not many customers know that in the same way passengers can rate Uber drivers, they can also return the favor, and while customers’ ratings aren’t being used in any real way right now (at least locally), they could someday be used to determine which customers can be given preferred status for pickup during busy hours.

This, in my opinion, is the true appeal of Black Mirror among sci-fi fans. While set in the future, everything feels so near, you can almost touch it. In fact, some episodes are downright current. In the series pilot episode National Anthem, a British princess is held captive by an anonymous kidnapper, whose bizarre request for ransom ends up capturing the attention of the entire world. The interaction between the kidnapper and British government are conducted through a series of tweets and YouTube videos uploaded through proxy IP addresses.

In many other episodes, the question that always seems to be foremost in Brooker’s mind is “What if you could do something, with this current, or a generation higher, type of technology?

This is especially evident in how the story of the first episode in the series’ second season, Be Right Back, developed. Unable to cope with her husband’s death in a freak car accident, the main character turns to an instant messaging service that mimics the deceased’s language patterns based on everything he has posted or uploaded online while still alive. The chats quickly developed into phone calls, until eventually she is offered a limited-offer trial service, which essentially uploaded her husband’s social media presence into the body of a fully-functioning robot. While the last part is still a little bit out there, the question is still very clear – would you do it if you could? 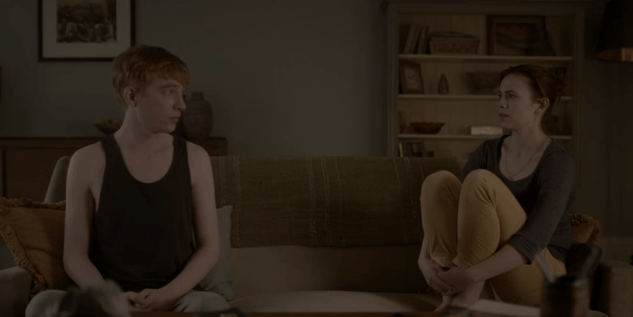 Scene from “Be Right Back”

Even technology which may seem like a no-brainer at the beginning can become a real mind-bender in the end. Such is the case in Season 1’s The Entire History of You, where humans have the capability to store all experiences in a thumb-sized contraption buried in the skin behind their ears. They are also able to replay, rewind, and review the same, much like a person with eidetic memory and low-latent sensory inhibition can recall all experiences. What could possibly go wrong there, right? Human nature, is what. Ever had those moments where you replay scenes over and over in your head, trying to figure out where you might have gone wrong, and how you could have done better, fixed things? Imagine being able to do that in high definition, and replay it to your friends for their thoughts.

I have been known to wonder out loud about why technology is not moving as fast as it should. Why are we still not able to successfully clone pancreas (and cure diabetes), when the human genome was supposedly mapped more than two decades ago? Why do we still not have flying cars and zero-calorie cupcakes? I never stopped to think if we could handle the implications of these advances in medicine, transportation and nutrition. Ultimately, Brooker’s ability to home in on uncomfortable and unsettling implications is what makes each installment in the series worth checking out for all fans of futuristic genres.

Have you seen any of the episodes? What are your favorites? Share your thoughts in the Comments section below.

One thought on “A Quick Peek into the Black Mirror”