Two weeks ago when I talked about Clash Royale’s new in-app deals/purchases (here), I talked about Epic and Legendary Chests – special chests that you can sometimes buy from the in-game Shop. I mentioned that Legendary Chests are great purchases especially for people who don’t have any Legendary cards or only have a few of them, while the randomness of Epic Chests means that they’re only going to be really worth it if the person buying is looking to get several different Epic cards.

What I didn’t mention is that you can get both Epic and Legendary Chests for free. They’re now part of the “chest cycle” that the game follows and I got both of my current cycle’s last week. I’d like to talk about the contents of both these chests and assess whether these chests would have been justifiable purchases if I had bought them instead. I opened my Epic Chest first because it only takes 12 hours to open a free Epic Chest. Before I talk about its contents, I need to talk about which Epics I need and/or want because that’ll be the basis of whether I’d be happy with this Epic Chest or not.

Buying an Epic Chest would have cost me $4.99 if I had zero Gold saved up.

My main Clash Royale deck is popularly known as the “Trifecta” deck. The most common and battle-tested variant of the Trifecta deck has Poison, an Epic card. For the longest time, I’ve been using a Level 3 Poison and have been waiting for it to appear in the Shop. It is the only card in my main deck that has yet to be upgraded to Tournament Standard levels and I feel it every time I lose matches in Tournaments and Challenges. I managed to get eight copies of Poison prior to getting my Epic Chest and need only two more to finally upgrade it to Level 4. If I get two copies of Poison in this Epic Chest, I’ll be satisfied – I wouldn’t care about any of the other cards in it.

If I didn’t get any Poisons, I’d be happy if I get the following Epics: Witch (I’m quite fond of this card and I need just two more to upgrade it to Level 4), Bowler and Guards (both cards are pretty good meta cards at the moment), Goblin Barrel (this card is in my alternate deck for tournaments and it’s only at Level 3), Freeze (a good alternative to Poison especially from Level 5 up), and Mirror (which became an exploitable card for tournaments after SuperCell changed its abilities). Any of the other Epic cards wouldn’t mean much to me, and I’d be annoyed if I get any more of X-Bow, Skeleton Army, or Rage. So what did I get?

Two copies of Goblin Barrel! That means I only need 5 copies more to upgrade it to Level 4. So far so good, and I have 8 more cards to go. Next, I got…

Three copies of Poison! I can finally upgrade it to Level 4! And I have an extra copy that moves me closer to upgrading this card to Level 5! Five more cards to go, but I’m already happy with this Epic Chest. Still, you can’t go wrong with getting more cards, so my final Epic cards are… 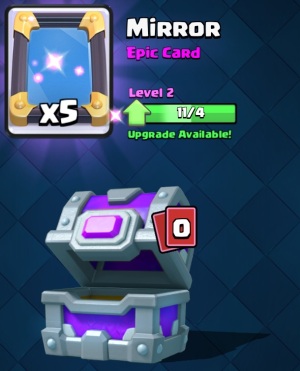 So I got more than enough copies of the card that I needed (Poison) and it came with two cards that I wanted (Goblin Barrel and Mirror). This Epic Chest would have been worth the $4.99 if I spent cash on it – getting it for free makes me even more happy. Does this mean that Epic Chests are worth buying now? I’m still unconvinced, honestly. Buying Epic Chests reminds me of buying CCG booster packs – sometimes you hit it big, but most of the time you get disappointed.

Now let’s go to my Legendary Chest. Prior to the update, I had already gotten a copy each of Miner and The Log, and after the update I splurged on a Legendary Chest for the same price as an Epic Chest ($4.99). I got a copy of Sparky, which was fourth on my personal ranking of Legendary cards (here) so I was happy with the purchase.

If I were to buy a Legendary Chest completely with cash, I’d have to spend $4.99 – the same as an Epic Chest.

Honestly, getting anything other than The Log or Lava Hound would make me content enough – I don’t think I’d be able to make good use of a Level 2 Log and I still don’t have the needed cards to support the Lava Hound. But I really prefer getting a new Legendary card instead of another copy of what I already have. And I’d be really happy if I got a Princess or an Ice Wizard (ranked two and one on my personal rankings). So, what did I get?

But getting the Inferno Dragon is not as bad as getting unwanted Epics in an Epic Chest. One copy of it is immediately playable, and all I need for Tournaments and Challenges is one copy. This is quite unlike the first Epic Chest that I bought with the Gold that I saved up which had several Giant Skeletons. I still stand by what I said before – spending money on a Legendary Chest is worth it for people who don’t have a lot of Legendary Cards.

Those are the contents of the Epic and Legendary Chests that I got recently. Have you purchased/gotten one or both of these new Chests? Tell us what you got from them by leaving a comment or two below!