In all my time of doing Burger Month, I can’t believe I haven’t written up anything about Army Navy. It’s become a staple of burgers here in the Philippines. It may not be as big as McDonalds or Jolibee but a lot of Army Navy stores have popped up all over the archipelago over the years. And I actually do enjoy going to any of their branches and getting myself a burger once in a while.

I guess that’s pretty much why I haven’t posted anything from them for Burger Month: it’s become somewhat of a habit that it doesn’t feel all that special anymore when I do eat there. But this week, I’m here to correct the mistake I’ve been making all these years of doing Burger Month as I will be reviewing one of Army Navy’s burger this week!

Army Navy isn’t your typical “gourmet” burger joints. They don’t have different kinds of burgers or anything fancy. They serve plain ol’ burgers with meat in it. You can have one, two quarter pound patties or, if you’re really feeling hungry, the Bully Boy, which stacks three quarter pound beef patties in one burger. All of them do come with lettuce, tomatoes and onions. But if you want something extra, like cheese, jalapenos, egg or bacon, they’re happy to oblige… at extra cost, of course. 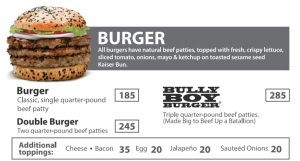 When I got to Army Navy the other day, I wasn’t hunger enough to try to Bully Boy burger, unfortunately. Okay, I have yet to take on the three beef patty monstrosity in all my years of eating there, but there will be a day of reckoning! I was just hungry enough to get myself a regular single quarter-pound burger with additional cheese and bacon. Hey, everything goes better with cheese and bacon! Oh, I also had to get it with a side of onion rings because onion rings are so hard to get over here in the Philippines!

I will say that Army Navy isn’t all that big in presentation. Essentially, I got my burger with cheese and bacon all wrapped in aluminum foil which was in a very simple cardboard box. No fancy plastic basket or anything like that. It was a box! The onion rings were also served in the same way: in a box. As I unwrapped my burger from its tin foil encasement, I noticed the same basic presentation for the burger itself. I wouldn’t say it was messy but it wasn’t really neatly packed as well. I kinda like the really basic and no frills presentation. Makes it seem really hearty, like you just don’t care how it looks as long as it’s really good.

There wasn’t a reason to complain about the lettuce and the tomatoes because they actually tasted really fresh. The lettuce was still crisp and the tomatoes were pretty juicy but still had a good bite to them; they weren’t mushy in the least. Oddly enough, my complaints have to fall on the extras I ordered. The cheese wasn’t quite melted to a gooey consistency but that’s a minor quibble. My main issue had to be with the bacon. While the bacon strips were crispy, they also had a very chewy consistency. It was almost like chewing on beef jerky. It had the flavor of bacon, at least.

I also have to review the onion rings as I did order it. There really isn’t a consistent way Philippine restaurants make onion rings. I’m not familiar how onion rings are made in the United States or other countries, but each and every restaurant that serves them in the Philippines seems to have a totally different way of preparing them. Sometimes, it’s like they’re covered in really thick tempura batter. Other times, it’s like they’re encased in a thin layer of cake batter.

I do have to say that, among the places I can get onion rings in the Philippines, I like the ones from Army Navy the best. The onion rings I got with my burger were really good. They were crispy and the onions were firm, not stringy at all. I do wish that they did serve more than what I got. It didn’t feel like I got shortchanged but it didn’t feel like I was getting enough as the same time because they were that good!

While I do like eating at Army Navy, there is something that does prevent me from visiting their branches on a more often basis: the price. They aren’t super expensive but they are pretty pricey. All-in-all, the regular quarter pound burger with additional cheese and bacon with a side of onion rings and a drink cost me a pretty penny. As such, this place isn’t for the budget conscious burger lover.

However, it’s still hard not to recommend going to Army Navy for their burgers. Yes, they are more expensive than most but they are really good and filling. If you love eating great burgers, you should definitely enlist at Army Navy soon.

Have you eaten at Army Navy? What did you think of their burgers? Let me know in the comments section below!