Last week, I made another rant about Supergirl and her seemingly weird need to be helped very frequently by the rest of the supporting cast. It’s seems really odd that would happen to The Girl of Steel so often because you don’t really see it happen that often to the other DC superheroes like Arrow or The Flash. But, while I was writing that entire piece, I was just thinking when February 16 would finally arrive. Why? Because that was the day Street Fighter V got released here!

I got bitten by the Street Fighter bug only recently when compared to other gamers who’ve been with the series for years. After all, I only started really playing the game when Street Fighter IV came out in 2008. But I just loved it because I apparently have a modicum of skill with the game. It’s disappointing it doesn’t translate to other fighters. 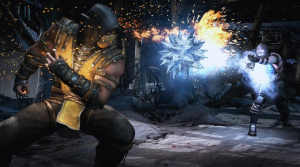 So wish I could play you, Mortal Kombat X!

But still, Street Fighter IV and it’s like dozens of upgrades/editions was actually a game I could play and play well! But that game is old news now! We now have a full-fledged sequel with Street Fighter V and it was a great joy to actually play the official version after so many months of playing (or trying to play) the Beta version on the PlayStation 4… which never really connected with other players a majority of the time so I just kept on playing Training mode for ages!

Anyway, we now have the actual official release of the game now! Okay, I had to wait for my PlayStation 4 to upload a huge patch first before actually getting into the game. But once that was done, I could play the “real” version! Yay!

Now, the biggest question any person who plays any version of Street Fighter is who are you going to maining? Yes, you need to know who’s going to be your main character when you really want to bring the pain! In Street Fighter IV and its subsequent versions, I’ve always controlled Vega (Balrog for those using the Japanese voices) for a myriad of reasons. But, after my time with the beta, I’m sadly going to be dropping him in Street Fighter V.

There are a lot of reasons why I loved Vega in the previous game. First, he was a charge character. I know a lot of people hate using charge characters because you can’t just do their special attacks on a whim. But I like them because they’re easy to pull off! For some odd reason, however, Capcom decided to make him just another “motion” character, which really screws him up, in my opinion! Also, Vega feels a little bit more clunky and complex in the latest game because, not only did they change him from a charge character to a “motion” based fighter, they also gave him two stances! I just don’t have the patience to learn two sets of button attacks for just one character. So, sorry Vega! You’re out!

So, I’m making the switch now. The question is: who’s going to be my main in Street Fighter V? I’m going to need a rather straightforward character who uses the unpopular charge motion layout. Thanks to my time in the beta, I’ve narrowed my choices to three potential candidates: Necalli, FANG and M. Bison/Vega in Japan/Dictator. Note that, even though she’s a charge character here, I didn’t include Chun-Li because of all of her variant attacks. Like I said, I don’t like memorizing a lot of button attacks and, since The Strongest Woman in the World has a plethora of modified attacks based on where you hold the joystick, she’s out of the running.

I did try Necalli for a while but he’s not a full-fledged charge motion character. Actually, he only has one move that’s a charge motion, the rushing claw attack. But that’s not the reason why I decided not to main him. The biggest reason why I don’t like using Necalli is how short his limbs are! One of the reasons why I loved Vega is his long range pokes. Necalli’s stubby arms and legs don’t really reach out a lot so, bye, Necalli!

That just leaves FANG and M. Bison. I actually was torn between the two of them as they fulfill a lot of my requirements for a character. They’re both charge characters, have good long ranged pokes and have straightforward button attacks. I tried using both characters extensively and it was pretty close. I initially thought I was going to pick FANG because I love his super long reach! It’s almost Dhalsim like! And you can play him really annoying by simply using his V-Trigger to deploy his super slow but unblockable poison projectile. But, ultimately, I also gave him up for the silliest reason: I can’t nail jump in attacks consistently!

FANG probably has one of the most awkward jumping forward hard kicks ever as he kicks backwards! It’s great for cross ups but useless otherwise. Also, for some odd reason, I keep unintentionally whiffing my other jump attacks! Even his best one, the jumping medium kick seems to miss a lot for some strange reason! So, by default, I’ll be playing M. Bison for now!

Honestly, I never, ever thought I would be playing M. Bison! I tried using him in Street Fighter 4 but I could never really play him effectively. But, in Street Fighter V, I can for some strange reason. He has really fantastic jump attacks and doing combos is fairly easy and straightforward. I actually discovered a combo while testing him out! I never was good enough to devise my own combo and would just copy others! But I managed to develop my very own jumping hard punch, standing hard kick, link into crouching medium punch and close with Knee Press by myself! I’m so proud! So, if you catch me online, you’ll see me sporting a new Dictator look!

Well, if I can get online on Street Fighter V anyway. But that’s a topic for next week! See you then!

Who’s your main in Street Fighter V? Let me know who it is in the comments section below!