The BBC’s Sherlock series successfully brought the character and his mystery tales into the 21st century. The show successfully resurrected Sir Arthur Conan Doyle’s characters such as the titular Sherlock Holmes and Dr. John Watson and made them very palatable for modern audiences. Its first two Series/Seasons were incredible but a somewhat disappointing (but still good) third.

We’re not supposed to get a 4th Series/Season until 2017. But we did get a Special episode called The Abominable Bride, a rather late Christmas gift from the show’s creator, Stephen Mofatt. So, what does Mofatt give us after cutting our teeth with the modern version of the super sleuth? Set the Special in Victorian England, of course!

While The Abominable Bride has already been aired and those who were going to watch it have probably already done so, there’s still a small portion who may not have. Maybe they forgot (how dare you!) or maybe they just haven’t gotten the time to sit down and watch the almost 90 minute Special, I’m airing on the side of caution and making this a SPOILER FREE review.

The Abominable Bride starts out with Sherlock Holmes and Dr. John Watson (played by Benedict Cumberbatch and Martin Freeman, respectively) called in to investigate the only kind of mystery Sherlock would be interested in: a mystery that cannot be solved. One the morning of her wedding anniversary, Emilia Ricoletti goes onto her balcony and starts shooting at random people with two revolvers. She then turns one of the guns on herself, apparently killing her. However, during the same night, Emilia Ricoletti’s husband is confronted by his dead wife and shot to death. 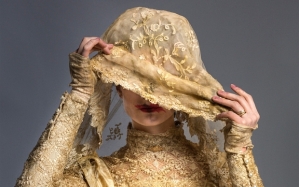 What’s behind the veil of mystery?

There are a lot of good things I have to say about the BBC Special. First off, while we’ve all gotten to know the characters from the modern era Sherlock, in The Abominable Bride, we’re presented with the 19th century representations of the characters. Actually, they’re more like the characters from the original stories by Arthur Conan Doyle. It can be rather shocking to see what the “original” version of Mycroft looks like but I really liked it. It’s really refreshing to see how Mofatt somehow acknowledges the changes he made with the characters and, at the same time, pay homage to the original work with The Abominable Bride.

Also, once again, the acting is really good! Una Stubbs is still entertaining as Mrs. Hudson. Rupert Graves’ version of the somewhat bumbling Inspector Lestrade is still a hoot. But its still the duo of Benedict Cumberbatch and Martin Freeman that makes it all work. It’s incredible to see the two of them back in the roles that made them incredibly famous and the chemistry between them is just fantastic. Cumberbatch is still perfect as Sherlock Holmes, delivering lines perfectly with a deadpan tone that just makes him sound smarter than everyone else in the room. And Martin Freeman is plays Dr. John Watson as the perfect foil to the “highly functional sociopath” that is Sherlock. They pretty much are the reason why you watch each and every episode of Sherlock. And The Abominable Bride is no exception.

I would still watch it if they called it “Sherlock and Watson.” Wouldn’t you?

The Abominable Bride’s overall plot and story is very good for the most part. The first third of the episode immediately draws you into the world. There are some times where Mofatt cleverly uses the “floating text” so we can see what all of the characters are reading or trying to say without interrupting the flow of the scene. The second third, where Sherlock and Watson actually go investigating a case is really intense and just gets you more intrigued with how Sherlock is going to crack the case.

Unfortunately, it’s the final third part of the episode where things kind of falls apart. Without really revealing any major spoilers, the entire tale starts to unravel, the overall tone drastically changes and feels disconnected to the previous events of the Special. Then entire thing goes off on a tangent and it did suck away at some of the enjoyment. The central “mystery” regarding Emilia Ricoletti also falls apart at the end, leading to a lackluster conclusion to such a promising mystery. These issues were not enough to totally wreck the entire experience but I can understand why some people may be upset at the turn of events. 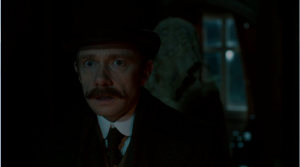 Don’t look behind you!

Overall, The Abominable Bride is a great entry in the Sherlock series. It’s definitely entertaining, especially the first two-thirds of the episode. It’s definitely flawed but I think it’s much better than the entire 3rd Series/Season. It’s, at least, good enough to tide you until Series/Season 4 comes in 2017.

Have you seen The Abominable Bride? What did you think of it? Let me know in the comments section below!