I know I’ve been slacking off with my reviews as of late. Let’s just say things have been very hectic due to various reasons. But, like the Star Wars franchise, I’m back now! And speaking of Star Wars, Episode VII: The Force Awakens was just released in the Philippines today and, for my return review, I’m reviewing it!

I’ve been eagerly anticipating this film ever since the first trailer dropped. Being a huge Star Wars fan, it’s kind of hard not to be excited! From the very first teaser, it looked like JJ Abrams hit all of the right notes right off the bat. It looked fantastic and every new trailer would send chills down my spine. The trailers made it appear we were going to get a new trilogy of awesome Star Wars films.

But I’ve been burned by Star Wars before; I’m speaking of the Prequels, of course. The first trailer of The Phantom Menace looked cool… but the actual film was not. So, I was looking forward to The Force Awakens with cautious optimism. I really wanted this new trilogy helmed by JJ Abrams to be good.

Honestly, I could end the review right then and there. Simply put, The Force Awakens is a must-watch for any Star Wars fan and will wash away the bad taste the Prequels may have left in your mouth. I would also recommend it for non-Star Wars fans as, well, it’s an incredible film on its own. There are still some niggling issues but it’s still superb film. But that wouldn’t make for much of a review, would it? Read on if you want to get a little more detail in this SPOILER-FREE review!

Hum the theme song while you look at this picture.

I wish I could give you some details or even summarize The Force Awakens but I actually feel like saying anything about the overarching story would reveal too much. Let’s just say that it takes place a couple of decades after the events of Return of the Jedi. The First Order, a group that rose from the fallen ashes of the Galactic Empire, are trying to take over the galaxy. It’s now up to a new cast of characters as well as some returning heroes from the Original Trilogy to take on The First Order head on.

The overall tone of The Force Awakens feels like The Original Trilogy. But it never feels like its outright copying it. Unlike the Prequels, The Force Awakens feels like it belongs in the Star Wars universe. The new primary heroes, Rey, a scavenger from the desert planet Jakku, and Finn, a man trying to escape his past, fit in well with the returning Han Solo, Chewbacca and Leia. Harrison Ford and Carrie Fisher pull off their roles once again; it felt like they’ve been playing the characters all their lives and it was a dream to see them bring back Han Solo and Leia to the big screen.

They’re older but they haven’t missed a step!

While it tugged my nostalgic heartstrings to see Han, Chewy and Leia again, this is undoubtedly Rey and Finn’s movie. I love these new characters! John Boyega does a marvelous job in bringing Finn to life on the big screen. He manages to make Finn a character that’s easy to understand but has a lot of layers to him. He tries to make himself a bigger deal than he really is but that’s just to hide the things he’s done in the past. A really great character.

Yes, John Boyega did a great job but it’s Daisy Ridley’s Rey that steals the show. There’s just this weird kind of magic every time you see Rey on the screen. She does have a very commanding presence and, while that’s probably because the character is incredibly well written, it’s mostly because Daisy Ridley pulls of an acting tour de force when bringing Rey to life. It’s hard not to get enamored by the character! 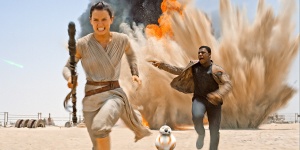 Not a very heroic shot of the two… but definitely the right direction to run!

The other heroes are also fun to watch. Many kudos to Oscar Isaac for doing more than decent job of portraying the Resistance ace pilot Poe Dameron. The character is incredibly likable and it is a shame he isn’t given that much time to really interact with the other two main protagonists. Like I said, this is more Rey and Finn’s movie. But I’m predicting Poe Dameron will get more screen time in the later installments. The character is written well enough but I would definitely like to see more of him.

And the new droid, BB-8, is actually pretty cool! I was afraid they were going to screw up the movie by making him some ridiculous comedy relief like Jar-Jar Binks. But, no. The droid does have a few comedic bits but they’re worth a chuckle or two. I’d go so far as to say BB-8 is pretty adorable! That BB-8 “toy” by Sphero looks pretty enticing, even with that $150 price tag!

If I haven’t been talking too much about the characters from The First Order, it’s because they aren’t really as good as Rey and Finn. The main “bad guy” Kylo Ren looks pretty intimidating… at the start of the film. He has a really dramatic introduction. Unfortunately, the more I saw of him, the less… menacing he became. Maybe that because I couldn’t help but compare him to Darth Vader. Kylo Ren just didn’t have the same commanding presence Vader had. Hopefully, he can step up his game in Episodes VIII and IX.

While Kylo Ren and the rest of The First Order may not be that impressive, the action scenes and special effects in The Force Awakens are excellent! The special effects were mostly perfect and I was just sucked into the worlds they presented in the film. There were a few missteps with a couple of the CG characters as they looked out of place. You could really tell the difference between the CG characters and the ones that were created using practical puppetry and make-up. And laugh all you want at the Kylo Ren’s lightsaber “crossguard.” It looks fantastic on the big screen! 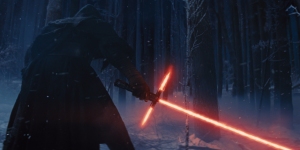 The battle scenes were just rip roaring fun! The fight scenes were intense and the dogfights between the X-wings and TIE Fighters manage to recapture the magic as to why the Original Trilogy’s space battles were so exciting to watch! They had an intensity to them that was just exhilarating to see on the big screen and The Force Awakens follows suit pretty perfectly.

But the thing I loved about the film is that I left wanting more. The Force Awakens is roughly 2 hours and 15 minutes long… but it certainly didn’t feel like it! It didn’t really end on a cliffhanger or had some “to be continue” flash on the screen when it ended. I just wanted more Star Wars! I waited for an after credits scene. Or some juicy piece of information to show me what Episode VIII was going to be like. I didn’t get any of it… but that’s actually a sign of a good movie if you want more! And The Force Awakens left me craving for what’s next… in a good way!

Only 16 months to go until Episode VIII!

Is The Force Awakens flawless? No. There are issues, such as some characters not being fully developed and some of the CG characters looked rather out of place. There are also a few plot conveniences where something occurs out of happenstance, which can be mildly annoying. But none of those issues detract from the overall enjoyment of the film. The Force Awakens is a fantastic film for both fans and non-fans of the franchise. A definite must watch!

Have you seen Star War Episode VII: The Force Awakens yet? What did you think of it? Let me know in the comments section below!