I love the concept and spirit of Halloween and I love looking at people really getting into the holiday by dressing up in elaborate costumes and getting into character. I, however, am not one of those people who loves making the extreme effort to get into a costume and all that. So, if I do get invited to a costume party, I’d probably make one at the last minute. With that in mind, I’ve compiled a short list of costumes that could easily be made in a pinch.

Finn the Human from Adventure Time

It’s a stunningly awesome cartoon suitable for all ages! And it’s so easy to dress up as Finn the Human! 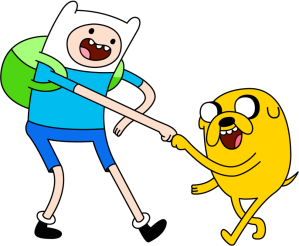 Guess which one is Finn the Human?

Getting the majority of the stuff to dress up as Finn is pretty simple. All you need are just a blue shirt and blue shorts as well as some black shoes paired with white rolled up socks. The knapsack may be a little difficult but I would think any green backpack would work. If you can’t find a good looking white hoodie/skull cap, I’m pretty sure you could make do with a simple white T-shirt instead.

If you don’t know what QWOP is, you’re missing out! It’s basically one of those games that frustratingly hard because of extremely awkward controls. It’s fun and good for a laugh… and you can play it by clicking on this link right here.

All you need to do in order to get the look down is a red athletic shirt, red shorts and some sneakers and you’re practically done! You may have to get a huge sticker with the word QWOP on the front of your shirt as well just to make it look official. It’s a extremely easy costume to assemble. But the costume is actually more about the attitude and the conviction to portray the character…

…and maybe good health coverage. Or, at the least, bandages. Lots and lots of bandages.

Solid Snake in a Box from Metal Gear

C’mon! This is a staple! Ever since the box made it’s debut in the very first Metal Gear, everyone had the “bright idea” to make it into a costume. I don’t know how many actually pushed through with it, though.

What lazy cosplay list would be complete without the box?

This is probably the most ridiculously easy costume to put on! All you need is a box and that’s it! The only challenge may be to find a box big enough for you to fit in. There are a lot of challenges to the costume since it’s kind of hard to socialize while wearing the box. And good luck eating and drinking in that thing!

While the Daredevil costume from the Netflix series appears incredibly easy to pull off, there are a lot of huge problems with the outfit. First, you gotta have a black skintight long sleeve shirt, black gloves, etc.  But the biggest issue would be the “mask” thing Matt Murdock’s alter ego wore when he took down crime. How can you see through that thing? So, why go through all the hassle and just go as Matt Murdock instead.

Pretty simple outfit once again. If you’ve got a gray suit, you’re pretty much all set! The only problem may be with finding some red tinted sunglasses as well as a good walking stick. Both of these things can be purchased or you can make your own. The sunglasses with some red cellophane on top of the the lenses would work and, for the walking stick… well, just get a thin metal rod and color it appropriately. Done!

Even if the show’s been off the air for a decade now (yes, it’s been that long), people still have fond memories of Friends. Well, it’s pretty easy to dress up as them. But my personal pick is Chandler. He’s got a very simple look to pull off since he does have regular clothes on.

Better yet, dress up as Joey dressing up as Chandler!

Since I’m a guy, I’ve never felt the need to dress up as Tifa Lockhart. But she is an icon from the iconic Final Fantasy VII so I’m adding this just in case a couple of ladies are rushing for ideas for a last minute costume!

It just takes guts to pull off the look!

Do you have any other costume ideas for Halloween that are extremely easy to pull off? Let me know what they are in the comments section below!