Over the week, there was a deluge of geek news that came out due to recent San Diego Comic-Con. There was a plethora of topics I wanted to write about. There was the new trailer for Batman v. Superman: Dawn of Justice. There were also the leaked/bootleg trailers of Deadpool and Suicide Squad. There was even the reveal that Ken will be in Street Fighter V. There were tons of things I could’ve talked about.

But, just a few hours ago, some news came out. Some thing that really affected me and a lot of people I would think. 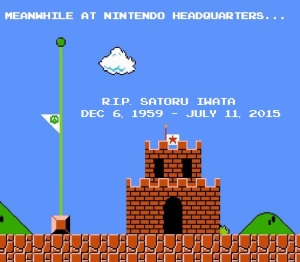 There are probably hundreds of tributes to Satoru Iwata and there are probably more people better equipped to express the impact the man had in the gaming world. The best thing I can do is to write about how I actually remember him.

For most people, Nintendo’s spokesman would probably Shigeru Miyamoto. After all, Miyamoto was the brains behind the Japan company’s biggest franchises. Donkey Kong. Mario. The Legend of Zelda. Star Fox. And much more. I think that’s honestly pretty fair. However, that’s not to say Satoru Iwata didn’t have an extremely creative mind as well.

I still have no idea what’s happening here.

When Iwata was promoted to CEO of Nintendo of Japan, the company was in trouble. The Gamecube didn’t click with audiences and it actually looked like Nintendo was going to be beat by its competitors, Sony and Microsoft. Most CEOs would’ve tried to outdo their competitors by ordering their R&D departments to create a bigger and more powerful console. Instead, Iwata came up with the bright idea to actually find ways to attract the normally non-gaming audiences to get a console. Thus, the Wii was born. This kind of thinking was not only really creative but an extremely gutsy move as well. But it paid off!

He also did another gutsy move that no one really talks about: he destroyed the GameBoy. Well, not so much “destroy” per se. Rather, he decided to “evolve” Nintendo’s extremely popular handheld console when he envisioned the DS. Now, why so I say it was a gutsy move? Because he got rid of the name! It would have been easy for Nintendo to create the DS and call it a new GameBoy. But Iwata decided to drop the name. I honestly think it was really smart as the GameBoy name was kind of tired.

But for me, the reason why I’ll miss Satoru Iwata is because he wasn’t like other CEOs in the gaming industry. Yes, he would dress up in a suit but he still had this weird sense of humor that I really appreciated. I may not get a lot of the jokes but I love that he adds a lot of levity in the “serious” business of making video games.

In this day of age, gaming has become overly serious. If you watched the recent E3 keynotes of Sony and Microsoft or any of those big press conferences, you didn’t see any of the CEOs making fun of themselves. They were all very serious and humorless. I mean, you wouldn’t see them come out as puppets! But Satoru Iwata did this year! This was a man that believed that video games was a fun hobby; something we tend to forget these days.

I will miss Satoru Iwata in my own special way. I never was fond of the games he was a part of. I never got to play Earthbound/Mother. I never played Kirby as well. And I think Balloon Fight is just a Joust ripoff. But I will still remember Satoru Iwata fondly as a man that reminded the gaming world that creativity (and a little good-natured humor) goes a long way. 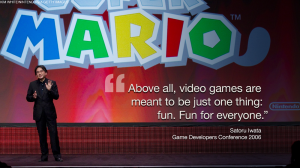 What are your thoughts on Satoru Iwata’s passing? Let me know what they are in the comments section below.

One thought on “Sayonara, Iwata-san”