Last week, I talked about the 3D fighting game that’s more renowned for its sex appear rather than it being a really deep fighter. Dead or Alive. This week, I’m going to talk about a more popular 3D fighter; in fact, I would say it’s the most popular fighting game series in my country. That would be Namco’s Tekken franchise.

Now, I say it’s the most popular fighter where I live (the Philippines) because, well, it is! In the arcades (yes, we still have those over here), I generally see more people crowding around a Tekken machine more than the Street Fighter cabinets. I also think the third game of the franchise was the first fighting game I ever played. I was three years old then. It looks incredibly dated now. But then, that game looked fantastic!

I remember as a kid, I had fun playing Tekken 3 because I could actually be “competitive” by pushing buttons randomly on the controller with Eddy Gordo, the Capioera master. My memory may be betraying me (or my brother may just be letting me win) but I actually had a pretty good win streak using Eddy way back when I was three. Good times!

Now that I’m older, I realized that I was only good at Eddy then since he was a new character at the time. And ever since then, Namco just kept only adding more and more characters to the roster, which I kinda like! In every new game of Tekken, they always add a good number of characters and each game’s roster is plenty deep! 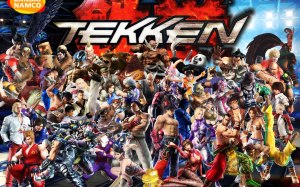 I can’t count how many characters there’s been

So I decided to play Tekken Tag Tournament 2. I haven’t really played Tekken extensively since that time so long ago. And I don’t think my button mashing with Eddy will be as “fun” as I remember. Since it’s a tag match, I get to pick two new characters! But who do I pick from this monster of a character select screen?

Well, I may as well go for the newer characters and, wow! I’m kinda impressed Namco decided to include a decent number of female fighters! I opted for two female fighters and went with Asuka (because of her slightly smug look on the character select screen) and Lili because, well, I just like her design! And, it turns out by pure coincidence, they’re rivals!

I played the entire thing on normal and I only had trouble with the final boss, the Jun Kazama/Unknown character! Man, did she feel really cheap! But, after a few tries, I did triumph over her and got Lili’s ending… which I loved! In fact, I’ve been playing Tekken Tag Tournament 2 just so I can watch all of the endings…

…then I remembered that I can just search YouTube to watch them all. Never mind!

I was worried that I wouldn’t like the fighting system since, like the previous fighting games I’ve talked about that’s not Street Fighter, most of the combos rely on rapid button presses, which I dislike. Oddly enough, with Tekken, I was pretty okay with it. Maybe because there’s more flexibility to the combos. And I do like you can hit the guy while they’re on the ground! I do laugh at Street Fighter because everyone’s so “honorable” that they don’t attempt to kick their opponent while they’re down. Nice to see the guys and gals in Tekken don’t have this problem!

But, at the same time, I do feel this makes Tekken really a super-technical game, much more so than the other fighting games I’ve played so far. There’s no way I’ll be able to play the game against experienced Tekken players! I did check out a combo tutorial vid and, holy crap! This is hard! It’s so hard that I can’t even begin to figure out what to do!

I don’t think I’ll be able to be good at Tekken; it’s just too technical for me. But I do still find it enjoyable at the current (beginner) level I’m at. It’s seems much easier to memorize a few important combos for your characters than with the other button masher combos in other fighting games. And I can finally hit someone while they’re lying on the floor like a lump!

Who knows? Maybe I’ll go try watching a Tekken tournament and see if it’s any good!

Well, Tekken has been one of the Sony PlayStation’s flagship titles ever since the first game came out on the very first PlayStation console. Speaking of which, one of Sony’s online services for the PlayStation 3 is closing their doors soon… and I’ll talk more about that next time!

Where does Tekken rank among the fighting games out there? Let me know in the comments section below!