A week ago, Variety got the scoop regarding Warner Bros. and DC’s cast list for the upcoming Suicide Squad. This caught my attention not because it was a casting reveal for an upcoming superhero movie. No, I was more interested with who would be part of the team! The Suicide Squad, or Task Force X if you’re a fan of the group, did not have a permanent roster. So, with the announcement of a cast list, they also had to include who was going to be in the movie!

I think the characters are actually more important than who’s playing the character. But, since they already have the cast, I might as well post my thoughts on them as well.

Okay, the inclusion of Enchantress is interesting in so many levels. First, she isn’t that popular a character so putting her in the film is an impressive risk. Also, since her power is harnessing magic, they’re pretty much confirming the existence of magic in the DC film universe… unless they make her use some device that makes it look like she’s performing magic. I hope it’s the former since that’ll open up a lot of possibilities where future stories could go.

Everyone’s using this Enchantress pic. Who am I to break the trend?

It’s quite weird that they decided to cast Cara Delevingne in the role, though. I don’t thing she really looks a lot like Enchantress. Then again, with the right makeup and if they color her hair, maybe, just maybe, Cara would kinda look like Enchantress. Besides, the costume pretty much makes the character most of the time.

The thing that worries me is the acting range of Cara Delevingne. I’m more familiar with her real life (alleged) bisexual/lesbian encounters with Michelle Rodriguez, Selina Gomez and Kendall Jenner. She has been in some movies like Anna Karenina and Kids in Love, two films I have no plans of watching anytime soon. Just to research her acting range, I did stumble upon a short film she did with Pharrell Williams…

If you can understand the anything about the film, please tell me! I can’t make heads or tails of what the hell happened!

While I can’t make any comment about her acting (that short film was of no help at all), she does have great smoldering eyes which is perfect for Enchantress? The really weird thing is, whenever I see Cara Delevigne, I always picture the rather crazy and spontaneous side of hers. But, whenever she takes on an acting role, it’s like they always cast her in these ultra serious stone faced characters! I actually think she would be more suited to play someone like Harley Quinn… but I’ll get to that character later.

While I was pretty sure that Captain Boomerang (I just can’t call him plain ol’ Boomerang) would be a part of the Suicide Squad, I’m just not sure which one. Would it be the more comical braggart George Harkness or the more anti-hero like Owen Mercer. I’m hoping that it’s the former (and better) Captain Boomerang! But, knowing how DC is with making “fun” characters, they’re probably not going in that direction.

That’s Captain Boomerang to you, bloke!

Also, looking at the actor that’s gonna portray the character, well, I’m pretty sure! Jai Courtney has never, ever done a comedic role! Oh, if you don’t know who the guy is, he’s going to play Kyle Reese in the “reboot” of Terminator: Genisys. He’s also been in another popular film. He was John “Jack” McClane Jr, the son of the legendary John McClane from A Good Day To Die Hard.

Well, Jai Courtney isn’t too bad but it just doesn’t seem to have a lot of range. There were some comedic parts in A Good Day to Die Hard. The problem is it was an extremely weak movie and the comedy bits didn’t work. Even so, casting Jai Courtney in the role of Captain Boomerang means we’re gonna get a gritty Captain Boomerang, which is disappointing.

Two different people have actually taken the name Rick Flagg in the comics. But, considering they’re all related (father and son), it really doesn’t matter which one will be in the film. However, since this is the villain version of the Suicide Squad (the original and less popular version was just a bunch of ordinary, non-superpowered army/navy veterans who fought superpowered baddies), we’ll probably get Junior. It still doesn’t matter which one, though because the only time I even learned about the person is from an episode of Justice League Unlimited.

Seen here: the first time I saw the character… EVER.

Actually, I’m pretty pleased they’re putting in Rick Flagg as part of the Squad, simply because I don’t know much about the character! Some fans may want to replace him with another superpowered baddie but I do think the Suicide Squad needs a good leader and someone “good” in charge of the team while they’re in the field.

I’m more excited with who’s going to be Captain Flagg! Tom Hardy has already proven to me that’s he’s a great actor with a great presence. I mean, he’s been in Inception as the funny “forger” Eames, the brutal Bane from The Dark Knight Rises and the tough and strong willed Tommy from Warrior!

I really like this guy! If anyone can pull of the role of a tough solider, Tom Hardy probably can!

This is actually the character I have the most concerns about. Oh, I love Harley Quinn. She’s probably one of the best characters ever created! She’s crazy buy bubbly and lovable at the same time. Although she may seem like a ditz and an airhead, she’s actually pretty smart! After all, she is a licensed psychiatrist! Of course, she also has the most distinct accent in all of comics! And a great singing voice to boot!

The reason why I’m kind of hesitant to see a live action Harley Quinn is because, like her “puddin'”, expectations for this characters are sky high! She has become one of the most beloved characters in the DC Universe! Not bad for a character that was supposed to be a one-off gag from the Batman: The Animated Series!

The actress that’ll be trying to fill the clownish shoes of Harley Quinn is Margot Robbie. I was kind of worried when I heard this for the simple reason that I never really heard of the actress. Then I did some research and it turns out she played Naomi Lapaglia from The Wolf of Wall Street. I didn’t watch the movie since I was pretty sure they’d be censoring and cutting up the film when it was shown here (it has a lot of nudity from what I’ve heard). But I did check on YouTube to see Margot Robbie’s range and to see if she could pull off a Harley Quinn.

Then I came across this clip from the movie…

Jared Leto as The Joker

You can’t have Harley Quinn without the Joker!

This is the decision that really concerns me. The Joker’s first appearance in the new DC Movie Universe is going to be in Suicide Squad and not a new Batman movie? Not only that, the Joker never joined the Squad. So why have the Clown Prince of Crime be in the movie in the first place. 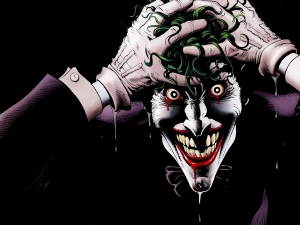 Clowns have always been terrifying.

This leads me to think two things. One, this is just going to be a glorified cameo or he’ll just have a quick appearance. I’m guessing that Task Force X is going to break into Arkham Asylum at one point to talk to The Joker to get information, which is why they need Harley Quinn (or Harley will just cause trouble when he sees “Mister J”). Or two, he’s the main antagonist. While the second idea may seem enticing, wouldn’t be undermining the Batman mythos? So, I’m hoping for the former and not the latter.

Now for the person playing the Joker. Jared Leto. Now, he’s a fine actor, no doubt. He won an Academy Award for Best Supporting Actor for Dallas Buyers Club, for God’s sake! But he is trying to fill the shoes of Heath Ledger, the man who gave a compelling performance of the Joker in The Dark Knight. So, can Jared Leto do it?

Well, the man is also very picky when it comes to taking roles. I actually have no doubt he’ll hit it out of the park.

Will Smith as Deadshot

The consummate professional assassin for hire, Deadshot shouldn’t be a intriguing character. In fact, I’d say he should actually be the most boring and dry character among the Suicide Squad. But somehow, the writers always manage to make him interesting to watch. He’s someone who will carry out any mission as long as he gets paid. He also has a death wish; when he wakes up in the hospital after several missions, apparently surviving impossible odds, he curses his “luck” under his breath.

But his costume’s incredibly cool, albeit a bit gaudy.

What kind of sniper wears red?

Now, I’m of two minds regarding the decision to cast Will Smith as Deadshot. I’m not even saying he’s a bad actor. He can definitely play the tough guy role like he did in Bad Boys. He can also play the fast talking cocky roles really well as seen in Men in Black and Independence Day. I think these two components that would make a great Deadshot. Oh, Deadshot isn’t supposed to be cocky? Well, yeah, but he has to be sure of himself so he does have to be just a little bit cocky as well.

But his more recent films haven’t impressed the viewing public. After Earth, anyone?

I do think he can pull it off. I just don’t think he should get all of the best lines, though.

Other the Enchantress and shoehorning in The Joker into the Suicide Squad, I do think Task Force X has been filled in nicely. There’s a good mix of wacky characters that’s sure to make for an interesting movie. On the casting front, I’m pretty much okay with the people (I’m actually looking forward to Margot Robbie’s Harley Quinn after seeing that clip).

Hopefully, when the movie drops in 2016, DC has a big hit on their hands. It’s about time the villains got the spotlight.

What’s your thoughts on the upcoming Suicide Squad movie? Let me know in the comments section below!