There was a time when Brothers Burger was the premiere gourmet burger joint in the Philippines. There were franchise outlets littering the city. That was then. Now, it seems like their stores are becoming extinct. They are, at least, not as plentiful as before. When the Brothers Burger in Megamall closed down and got replaced by an Army/Navy Burger. I do like an Army/Navy burger now and then but I just have so many fond memories of Brothers Burger, I was sad to see it go.

Being Burger Month, I decided to seek out a Brothers Burger and see if they got anything new. And they did have something new… and somewhat magical I would say. Lo and behold, they did!

Ladies and gentleman, I present to you the Extreme Bacon Burger! With fries and drink, of course! 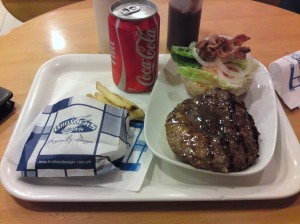 Such a thing of beauty!

Okay, I guess I have to explain why this is the burger of my dreams. First, the 1/3 pound hamburger patty is a blend of 70% beef and 30% bacon! They actually put bacon inside the burger patty! This is something I always wanted but I never thought would be made but I just didn’t think it would be possible! But they did it! They actually did it! Even with that, Brothers found it in their heart to add even more bacon in their Extreme Bacon Burger! Along with lettuce, onions, tomatoes and mayo, there are a couple of bacon strips topped with something called “bacon jam.” I have no idea what “bacon jam” is, but it sounds awesome!

When I got my Extreme Bacon Burger, I would have to say it was aesthetically pleasing to say the least. If you look at the picture above, you may think they forgot the bottom bun. Well, they didn’t; the burger patty is so enormous that I totally covers the it up! I even tried taking shots of it from different angles just so I could get the bottom bun in frame but I couldn’t! But trust me, it’s there! Now, that’s a good sized burger!

Of course, size can be a bad thing if the burger is awful. I’m glad to say that the opposite is true from my experience with the Extreme Bacon Burger! This is, in all honesty and without any irony and exaggeration at all, one of the best burgers I’ve ever had! I thoroughly enjoyed everything about it! The burger patty was extremely tasty. While I didn’t really detect any bacon flavor from the meat patty, it didn’t matter. The meat was extremely juicy and flavorful! I’m glad they made it really big so I could enjoy a lot of it!

I’m not a big fan of “sweet” food but I have to make an exception for the Extreme Bacon Burger. While the bacon jam was sweet, it was actually kind of savory. It wasn’t too sugary so it didn’t overpower the meaty goodness of the patty and actually complimented the burger nicely. The bacon strips were also cooked perfectly as they were rendered crispy but not burnt.

I do have a couple of nitpicks. Since it’s the Extreme Bacon Burger, I would’ve liked it if there were more bacon strips just to amp up the extreme to maximum levels. It’s also kind of difficult and messy to eat. Not only because of its size of the patty but because it’s pretty lubed up from the bacon jam! I don’t mind, really; I actually love a good, messy burger. But I understand there are some guys out there that don’t like their hands to get slick with meaty goodness. So I’m just warning people about it.

If you love a good burger (bacon burgers especially), you definitely owe it to yourself to travel to your nearest Brothers Burger branch (wherever it may be) and order yourself the Extreme Bacon Burger. I can’t recommend this enough! Get it while Brothers Burger is still alive!

Have you tried Brothers’ Extreme Bacon Burger? What do you think of it? Whatever your thoughts, let me know what they are in the comments section below!