So, during last week’s episode of Robin’s Adventures, I said that I’ll be trying to play more games and to do more reviews so I can write a lot more. Well, I don’t want to be a liar so I decided to just right in! I also said the first game I would probably review would be Lollipop Chainsaw. Why? Well, it does look like a lot of fun, for one!

Anyway, the story itself is really weird. On her 18th birthday, Juliet Starling discovers that the zombie apocalypse has begun. But, that’s actually okay for her since she and her family are zombie hunters. She also saves her boyfriend, Nick Carlyle, from becoming a zombie by cutting off his head… you know what? The story is nonsensical; I just realized how silly the story is while trying to summarize it.

But that’s part of Lollipop Chainsaw’s charm! I loved the fact that it never takes itself seriously. With a lot of zombie apocalypse storylines like Resident Evil and The Last of Us are incredibly serious and (honestly) a downer, this game decides to go in the opposite direction! It’s very refreshing, actually!

All of the characters, for the most part, are great! I love the characterization of the hero, Juliet Starling. She’s self-assured and has a positive outlook on life… even with all of the craziness going on around her. While I don’t really see a lot of depth in her character overall, I think that’s just fine for this kind of game. 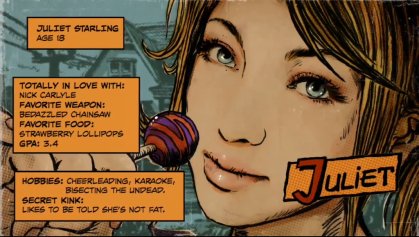 We look so much alike, we could be twins! 🙂

The banter between Juliet and Nick is also fun to listen to. I actually like Nick that, for most of the adventure, he manages to keep his spirits up even if he is just a decapitated head. Juliet’s family, consisting of her father, Gideon, her elder sister, Cordelia and younger sister, Rosemary, all have their high points. I think it would be nice to have a father and big sister like Gideon and Cordelia! However, I would hate to be related to a girl like Rosemary since she doesn’t really bring much to the table, in my opinion.

Gameplay is very simplistic. So simplistic that I was able to get it immediately! For the most part, I just mashed the attack buttons and tried to dodge when needed. The first few stages were kind of easy and I was able to get through them quickly. But I had a lot of problems when it came to the last three stages since each room is filled with tough zombies.

Speaking of which, I do like that there are a lot of zombie types. However, even the the good variety, they do get a bit repetitive after a while. I died a lot of times during the last stage since there are just wave after wave after wave of zombies! By this point, I wasn’t having that much fun since I was getting incredibly frustrated!

I wish I could be this calm with these many zombies coming after me!

But I know that, once I do overcome all of the zombies and make it to the end, I’ll be back to having fun again since the boss battles are very creative and always a new experience! All six bosses in Lollipop Chainsaw are a blast to play and figuring what strategies and weapons to use were fun to figure out. I especially loved the first boss, Zed and the Stage 5 boss Killabilly!

Lollipop Chainsaw is an incredibly enjoyable game to play. Even someone like me, who hasn’t been playing games until recently can get into the groove of slaying zombies quickly. It’s length is an incredibly sore spot, though. Also, once you finished it, there’s nothing much to keep you from coming back… unless you’re interested in collecting everything, that is.

How to get more hits on a site? Bikini clad girls, of course!

Have you played Lollipop Chainsaw? What did you think of it? Whatever you did think of the game, please put them in the comments section below!