Hello and welcome to I’ll Review Anything’s 4th week of Burger Month! Now, I’ve been reviewing burger chains that are pretty much off the beaten path. In other words, I’ve been reviewing the burgers that are not part of the Philippines’ Big Three burger chains, mainly, McDonald’s, Jolibee and Wendy’s. However, I have already reviewed something from McDonald’s (The McSpicy Chicken Sandwich) and Jolibee (The Ultimate Burger Steak). So it’s only fair that Wendy’s get her fair share as this review is about the Baconator.

I know the Wendy’s Baconator has been out and I’ve actually eaten it before… but that was when it was first released. I’ve also had the Son of Baconator fairly recently, which is a smaller version of the burger. But I’ve never ordered the full-sized Baconator as I got older since I was, well, afraid of it. The idea of eating that much meat seemed a bit overwhelming now.

Now, for the uninitiated, the Baconator is a monstrous burger and not for the faint of heart… literally! The burger consists of two quarter pound 100% all-beef patties, two slices of cheese, six strips of bacon with mayo and ketchup. If you’re on a diet… or if you have high cholesterol levels, I don’t think you should even be looking at this burger! 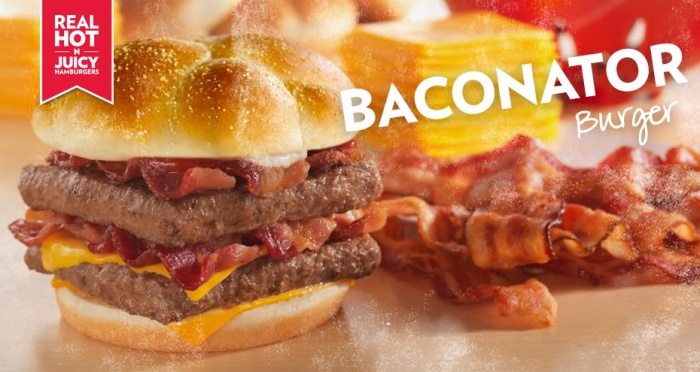 So I ordered the Baconator combo, which comes with a side of fries and a drink (I got a diet Coke… even though I know I just ordered a fat-filled caloric nightmare). In all honesty, I was pretty surprised at how small the Baconator looked compared to the other burgers I’ve ordered for the past month. The Jack Burger of Stackers even felt heavier than this!

I felt a bit overconfident afterwards. Was this the Baconator of old that I feared so much? Was this the scary monster I remembered? I took my first bite and, I have to say, it was pretty damn good! I could remember flashes of my younger days, eating lots of meat and not caring about how this would affect my health in the future. The bacon was pretty tasty and not having a single vegetable in the burger to distract from its meaty goodness was a welcome change from all of the “healthy” lettuce and tomatoes the previous burgers had.

But then, something happened when I was halfway done with the Baconator; I wasn’t enjoying its meaty goodness anymore. In fact, by the time I finished it, I was extremely glad it was gone since I didn’t have to eat the blasted thing anymore. Reflecting back on it, I guess that’s what happens when you just have just… meat. It’s like eating a steak by itself without any fixings. Sure, it tastes good at the start but, without any side dishes like mashed potatoes or anything to accompany it, you do get sick of it. I think the problem was I ate it straight without mixing it up with fries.

Also, I don’t think this is something I should be eating every day… maybe ever every week! When I stood up to leave, I really felt heavy and full and, well, unhealthy. The only healthy thing about it would have to be the ketchup since it probably has some traces of tomatoes in it. But, if the healthiest thing in the burger is ketchup, you’re in trouble! Oh, and don’t go saying the fries is good for your health because… well, you know it’s a lie.

Be sure you alternate between the Baconator and fries!

Overall, the Baconator is a young man’s burger. Yes, it’s good but it’s not something for me anymore. Sure, I’ll be able to eat it and enjoy it at the start but it’s not something I’ll be eager to eat… unless I’m really, really famished! Now, if you’ll excuse me, I’ll have to eat some oatmeal later to make sure the entire thing doesn’t get clogged in my arteries!

Have you tried the Baconator? What did you think of it? Please leave your thoughts and comments below!