Let me start off by saying this is going to be a lengthy post. I actually have more to say but I’ll probably put that in another Fiefo’s Editorial since I already had a lot to say about this topic.

Several months ago, media critic and feminist Anita Sarkeesian set up a Kickstarter project. The idea of the project is that she will create a series of YouTube videos focusing on the problems on how women in video games are presented entitled “Tropes vs. Women in Video Games.”

A lot of members of the gaming community didn’t take the news that someone was going to “attack” their favorite pastime in a good way (which happens a lot). So, what did these people do? They attacked and flamed her online.To say they went overboard with their comments is putting it mildly.

Not cool, gaming community. Not cool.

Still, she managed to raise the funds despite the harassment. Not only that, although her original target for the Kickstarter program was $6,000, she got that amount in less than 24 hours and actually collected close to $160 thousand when the campaign ended!

You can see Ms. Sarkeesian explain her situation during this time in the video below:

Anyway, the first two videos of the Tropes vs. Women in Video Games have been released on YouTube already. So, wondering what all the hoopla was about and just to see if “my beloved video games” were attacked harshly, I watched them.

In fact, here’s the first video in the series, regarding the damsel in distress trope:

The videos don’t really tackle the “sexiness” of women in video games (not yet anyway). Rather, they tackle the fact that women are usually kidnapped and have to be rescued. If you played any sidescrolling Mario game, you know that you usually have to save Princess Toadstool/Princess Peach from Bowser/King Koopa.

Or sometimes Mario has to save a girl from a giant gorilla.

Here, Anita Sarkeesian describes this scenario as women being an “object” that is forcefully taken from the hero and must take what is rightfully his. She also says that the captured woman can never save herself or make a successful attempt of escape, making her only hope for freedom lie in the hands of the hero.

Essentially, she is saying that the writing for video games are misogynistic since the stories are intentionally making sure that the kidnapped women are helpless, making them the damsel in distress that only the main character in the game can help.

Sorry, I may agree that it’s a trope and a cliche. But I don’t blame it on misogyny. I blame it on lazy writing.

Saving the princess or the damsel in distress has been a staple of, not only video games, but movies and books. Even fairy tales used the same trope. I do agree that a lot of video games do objectify women in one form or another. But calling the stories in video games misogynistic doesn’t seem entirely right.

The classical definition of misogyny is “the hatred or dislike of women.” Well, that doesn’t really fit Ms. Sarkeesian’s definition, which is some of the complaints that people are saying about her videos. But words evolve and so do their definitions. I think the modern definition of the word is “the treatment of women as a mere object of fantasy.” That seems more appropriate in this time of age.

But, I don’t think people who write stories, especially stories in video games, are really focused on doing it. Like I said, it’s more of a case of lazy writing.

The point of video game narrative is to explain why the hero wants to reach the final stage. But, in order to do that, the main character has to have some motivation to actually go through all of the stages, beating numerous waves of bad guys (and girls), solving devious puzzles, avoiding deadly traps and taking on stage bosses. The easiest way to do that is to have the hero have a personal stake in it. And the easiest way to have the hero make a personal stake in it is if the girlfriend/wife/daughter can be saved (or avenged).

But why do the damsels in distress all have to be gorgeous and sexy? That’s also lazy writing… and time constraints. Imagine if you have a childhood friend who happened to be a girl. You both became close friends, inseparable even. Eventually, as you both grew up, your feelings for her blossomed into romance and she felt the same way. Not to sound mushy, but it’s a love so intense that you feel that you can’t live if anything happened to her. 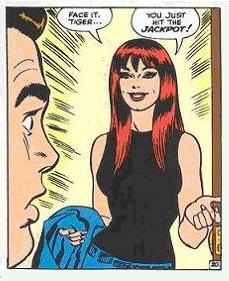 Or it could be love at first sight.

Now, imagine if your love got kidnapped and you actually and honestly had a way to save her. Wouldn’t you do anything to rescue her from harm? Now, even if you’re a talented writer, it’s extremely difficult to convey that feeling of love and attachment during the first few minutes of the game, even in a fabulously rendered cutscene. So, what do video game publishers do? Make her immediately desirable by making her sexy and beautiful and something you want to protect.

That’s why I’m saying it’s not entirely misogynistic. Game developers are stooping to the lowest common denominator on what makes a girl/woman desirable. And, yes, I know it. But they need to do it most of the time since game developers aren’t really into the storytelling business. They have a cool mechanic that they thought of, like the ability to free roam by climbing building and all the slick ways to stealthily kill someone in Assassin’s Creed. I don’t think they didn’t really think of the story that goes along with the game mechanics.

I’m not trying to marginalize Anita Sarkeesian’s project and I’m defending the harassment done by the jerks that attacked her. I’m just expressing my opinion on why this trope happens so often in video games.

I honestly liked the videos and I also think that she proved that she does play video games. As the series rolls on, I will be watching them and will form my own opinions regarding what she’s saying. But I will do it with an open mind and form my own thoughts and opinions about what she says.

I do think that the video game industry and other forms of media do need to change the way female video game characters are portrayed as sexy toys. But I honestly don’t think that saving the princess is, in itself misogynistic. It’s just that we can’t think of anything else.

If you have any comments regarding this, please leave them in the comments section below. Hopefully, I won’t have to block them like was Anita Sarkeesian had to do because of all the hate speech.