I’m a huge Godzilla fan and each time there’s a new film featuring the titular kaiju, I’m both filled with happiness and trepidation. I’m elated that there’s a new movie with the King of Monsters, but I’m also cautious that it may suck. So, when Toho announced Godzilla: Planet of Monsters, they were making a new Gozilla film, a fully computer animated production, my feelings of trepidation doubled. Would they do him the justice they deserve despite turning away from their traditional “suitimation” technique they’ve used since the ’50s? Will it still retain the stuff that made Godzilla movies so iconic for fans? Well, I got to see the English dub version of the film on Netflix and here are my thoughts on it.

Although this has been out on Netflix for a while now, I’m pretty sure a lot of people don’t know about this and this may have slipped under the radar for a lot of people. Even as a huge Godzilla fan, I totally forgot that Planet of Monsters has already been out since January. So, just to be on the safe side, this review will be SPOILER FREE.

Godzilla: Planet of Monsters takes place some time in the future. Mankind has left Earth in the wake of Godzilla laying waste to it and, along with two alien races called the Exif and the Bilusaludo, they try to locate another planet where they can settle. However, as their supplies are dwindling, they have to choice but to return to Earth. Haruo Sakaki, a soldier who witnessed Godzilla’s rampage first hand as a child, is hell-bent to figuring out how to kill The King of Monsters once and for all.

This isn’t the first time Godzilla has been rendered in full CG. There’s the atrocious American 1998 version that fan will heartily proclaim doesn’t exist. There’s also the 2014 American reboot that fans generally accept. Even Toho, the guys that invented Godzilla and most of the kaiju films abandoned its trademark “suitimation” and went computer animation with Shin Godzilla/Godzilla Resurgence in 2016. But, as much as I love tradition and the “suitimation” style, this is the most menacing Godzilla has looked ever, though it did take some getting used to as it looked like he went to the gym as he looks swole as hell! You know how his original name “Gojira” was supposed to be a mixture of “gori/gorilla” and “kujira/whale,” right? Well, Godzilla definitely looks the most “gori/gorilla” in Planet of Monsters and I like it!

Godzilla got some mad gains!

The rest of the animation is really gorgeous. As I said earlier, Toho decided to go full CG with Planet of Monsters and, after watching the film, I can see why. They really put an extreme amount of detail into everything.  They even went to the extent to make the armor the humans and aliens wear look like they have scratches and dents in them. You wouldn’t normally expect this kind of attention to detail in an anime production but it’s really appreciated here. They also did a great job of making the computer animation look like they’ve been hand drawn. Suffice to say, Planet of Monsters has a great aesthetic visual look.

Unfortunately, while they put a lot of attention to the overall style, it looks like not much effort was put into the character designs. Everyone just looks so bland. Even the main character, Haruo Sakaki, looks so ordinary and, strangely enough, his only real distinguishing feature that makes him look different from the rest of the cast is he’s the only white male with dark hair! The alien races, the Exif and Bilusaludo, aren’t all that creatively designed as well as they look positively human in every sort of way. The only way to kind of guess which character belongs to which race is to look at their skin color as the Exif are generally pale and blonde while the Bilusaludo are dark skinned. Everyone in between is, I’m assuming, human. But that’s my best guess only. 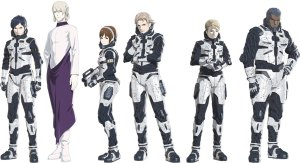 Which are the Exif and the Bilusaludo here?

Then again, determining which character is human or alien is pretty moot because most of the side characters don’t do much and don’t get any development at all. Even Haruo hardly gets any character besides him calling Godzilla a bastard each and every time he gets. They try to give the other characters some connection to the main character but they feel like these plot points were shoved in at the last minute. There was one character where Haruo tells one of the people that he hasn’t changed one bit since they were kids and the film expects you to have some deep connection with that side character because of that. It doesn’t work and, by the end of the film, I just didn’t care for any of them.

The overall pacing of Planet of Monsters also feels very awkward. Now, I’ve watched a lot of Godzilla films in the past and I have no illusions that they don’t move at a glacier pace and they only up the action during the final confrontation between the humans and Godzilla. But at least they do focus on the destruction and keep building the tension until you finally see Godzilla. In Planet of Monsters, it feels like they waste a lot of the film’s 88 minute runtime doing nothing to advance the plot or build characters. Without delving into any kind of spoilers (this is a SPOILER FREE review, after all), the first third of the film is just a whole lot of talking about stuff that could’ve been cut out and you wouldn’t have missed a thing. We’d have a much shorter film but one that would flow a whole lot better.

However, when they do finally get into the action, things really get intense. This is more action packed than anything they could’ve done when it was live action and it does look good. The humans here use futuristic weaponry like spider tanks, space bombers and even flying motorcycle-like vehicles to attack Godzilla and everything moves at a blistering speed, especially the flying motorcycle-things. At least they look really good, even while moving.

As I got the English dub from Netflix, I do also have to comment on the voice acting. It’s just fine. You don’t hear anything cringeworthy but you don’t hear any fantastic performances either. The problem is the script. Besides one or two scenes, the film doesn’t really give them anything to really show any emotional range. Everyone does do a commendable performance as they do all sound like the characters they’re supposed to be portraying. I will give some extra focus on Haruo Sakaki as it must have been tough for the English voice actor to sound so angry all the time. And I mean all the time. I also did find it awkward that, despite there being a rather high body count (this is a Godzilla film, you know), you never hear anyone give out a death scream. I’m not sure if they did the same thing in the Japanese dub but it’s strange to see so many people bite the dust without uttering a single sound while perishing horribly.

The biggest flaw of Godzilla: Planet of Monsters, however, is its plot. It’s the first installment of a trilogy of films and it’s very evident that you need to watch the entire series to get the full story. I do like how it turns the tables as its the humans now on the offensive instead of trying to fend off Godzilla but the overall tale told here is a barebones story with very little meat on it. There’s just so much filler and most of the characters make a blip with the viewers. Planet of Monsters felt like it was padded with a ton of unnecessary scenes to justify it being its own standalone film. Either that, or these characters and plot threads will be focused on in future installments.

Would I recommend Godzilla: Planet of Monsters? If you’re a hardcore Godzilla fan, it’s okay to watch just to see this new buff version of The King of Monsters in action. If you’re interested in a good anime film, I suggest you wait until the sequel is available. The second installment of the trilogy will be released in Japan later in May so it should be in Netflix by July. I would suggest holding off until then. As it is, Planet of Monsters only feels like half a film. Wait for the sequel and binge watch both then and maybe you’ll have a more satisfying experience.

Have you seen Godzilla: Planet of Monsters? What did you think of it? Let me know in the comments section below!