So, last week, I talked about censorship in video games and how uppidy some people get about how the hobby shows sexy women and smoking and stuff. Since I was talking about sexy women, that got me thinking of compiling a list of hot video game characters. But, being a girl, I decided I wanted to pull up a list from a somewhat unique perspective… a female perspective. 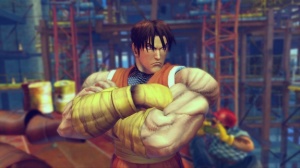 While I love controlling the psychotic and narcissistic claw wielding Vega, and I do love Ryu’s chiseled jaw and Ken’s flamboyance, there’s just something about Guy’s overall look that just draws me in! Maybe it’s the fact that he’s really agile and athletic. Maybe it’s his extremely stoic and guarded personality that makes me want to know what makes him tick. Or it could be those strong, stern eyes that seem to burn a hole into my sole. Whatever the reason, I think Guy is actually the hottest male character in the history of Street Fighter.

Honestly, I would love to main him just so I can watch him walk across the screen in that really brisk pace of his. But… he’s just so hard to control! I hope he makes in into Street Fighter V down the line just so I can see what he looks like now!

He went out in search for the men he used to work for. But in the process, he stole my heart… figuratively, of course!

I didn’t expect much from Red Dead Redemption for the silly reason that I didn’t think Grand Theft Auto set in the wild west would work. I’m so glad I was wrong! I would go watch my brother play it and it looked really fun! But the most amazing thing about Red Dead Redemption was its main protagonist, the “reformed” outlaw John Marston.

At the start, I just thought he was a really boring character. But, as we got deeper into the story, we got to see more aspects of John Marston’s personality, such as his high respect for most of the women-folk and that he was just a family man out to save his family. I grew to like John because of this and it definitely helped that he had a real manly (and sexy) voice! Kudos to his voice actor for making him sound so delicious… I mean, good!

Speaking of guy’s I hated in their first appearance…

From Zero to Hero

Man, I hated Chris Redfield in Resident Evil 2! Okay, I understand he was just a rookie cop when he got thrown into the crapstorm that is the Racoon City Incident. But I still hated him! I just hated his overall “pretty boy” design her was given! But as the Resident Evil series pressed on, I did notice Chris Redfield slowly shed off that awful boy band look and started getting more gruff… and more appealing, in my opinion!

By the time Resident Evil 6 rolled around, Chris Redfield looked positively hot! I guess it was the combination of the leather jacket and the slight stubble that did it for me. Too back Resident Evil 6 sucked, though.

Among all of the sexy assassins in the Assassin’s Creed games, Ezio Auditore da Firenze has to be the best of the bunch… and also the hottest!

Okay, Ezio started Assassin’s Creed II like a punk. But when he embraced his destiny to be one of the most badass assassins, well, there was no denying he was one sexy man! He already was very handsome and had great fashion sense way before he was an assassin but what he lacked was that dangerous edge that makes women swoon. Oh, and the fact that he can act all charming with that sweet French accent (is it French? I like to think it’s French), well, that pretty much sealed the deal for me!

Oh, I would probably be deathly afraid of him if he was a real person! But, man, is his accent super sexy! I might not be able to resist it!

Can a man without a face be sexy? Master Chief prove you can be!

Most of the men on this list are hot because of the way they look. Oh, sure, their personality plays a lot into why they’re hot. But it would be dishonest of me to say that their facial features didn’t become a factor as to why I find them attractive. With John-117, AKA Master Chief, AKA the toughest Spartan in the galaxy, AKA the hero from the Halo series, it’s more because of how much mystery has surrounded his physical appearance.

Despite not being able to get a really clear look at his face throughout the Halo series, there are things that makes Master Chief attractive. He has a strong sense of justice and is extremely brave. He’s willing to put his life on the line for others. But the thing that clinches it for me is his loyalty towards his AI companion Cortana. There’s something about loyalty that I find sexy… and you can’t get any more loyal than Master Chief.

Oh, and he may look like Dominic Purcell, the guy that plays Heatwave in The Flash. He’s handsome, right?

Naked Snake/Big Boss from Metal Gear may be one of the most manliest fictional characters ever. But his close friend, Kazuhira Miller is much hotter!

I think I let out a muffled squee when I saw that scene in the Phantom Pain. Anyway, there’s just something about Kazuhira Miller that just so incredibly sexy. Once again, it’s probably because of his loyalty to Big Boss and maybe it’s because he’s incredibly skilled at pretty much anything. Essentially, he’s only second to Big Boss when it comes to fighting and leading an army… but he’s much better at socializing and politics.

And he looks pretty good, too! Sure, his eyes are kinda messed up but you don’t see him whining about it, do you! That just adds to his hotness!

Well, who didn’t see this coming?

Damn you, Elena! You’re lucky you snagged him before he became popular!

Now, this is my list so I totally understand my tastes may be different from yours. It’s fun to ogle at video game characters now and again. That is, unless you’re Anita Sarkeesian apparently. I’ll talk more about this next time!

Who do you think should’ve made it on this list? Let me know in the comments section below!