Remember, that Daredevil movie that came out in 2003? Yeah, the one starring Ben Affleck and Jennifer Gardner as Daredevil and Electra, respectively? Yeah, that was a bad movie. However, I did review the Director’s Cut and I thought it wasn’t so bad. Oh, it’s still awful by today’s standards but I say it would’ve been at least remembered as a fun distraction. Daredevil deserved better.

When Marvel and Netflix decided to bring Daredevil onto the small screen, I was hopeful. I mean, the trailers looked fantastic. And it was going to be set in the Marvel Cinematic Universe. It’s also slated to be the first of Netflix’s “Defenders” series so there was a lot riding on this series. So, did the Daredevil television series meet the public’s lofty expectations. Or did we just get another lame Daredevil like the 2003 film?

Yes. Oh God, yes. Yes a million times over. You don’t have to know anything about Daredevil to get invested with the series. It’s that good. It’s not perfect… but it’s the closest thing to perfect I’ve seen in a long time. I’m going to go into more detail now but, rest assured, this review is SPOILER FREE.

As a child, Matt Murdock was blinded by radioactive chemicals. While he lost his sight, the chemicals affected his body and now his other senses have been heightened to superhuman levels. Now, as an adult, he uses these new abilities to patrol the streets of Hell’s Kitchen as a masked vigilante, fighting crime and injustice wherever he “sees” it. 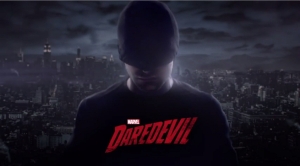 Is it really a mask if it doesn’t have eyeholes?

The one thing I really liked about the series is how gritty and realistic it is despite the fact Matt Murdock/Daredevil technically has super-powers. The story is handled as realistically as possible yet still manages to have a comic book feel to it. Yes, it’s probably impossible for one may to beat up half a dozen people and walk away on his own power. But, because of the awesome presentation of the series, you suspend your disbelief and allow yourself to consider that, if anyone could, it would be Daredevil.

Speaking of that, the fight scenes are excellent. They are all shot and edited in a way that you can see everything that’s happening clearly. The fight choreography is definitely true-to-life and brutal. Everyone, including The Man Without Fear, comes out of the fight battered and bruised, which is what I would expect from battles of this scale. They are extremely bloody at times so the less squeamish may find it unnecessarily violent. But not me! I love the grittiness of the brawls! More of this, please!

All the actors do an incredible job. And I mean, all. From the bit players to the stars, everyone gives a believable performance. Charlie Cox manages to give a sense of humanity to both Matt Murdock and Daredevil. Vincent D’Onofrio’s Wilson Fisk/Kingpin manages to strike this balance of being ruthless and sympathetic, making him a totally relatable character. Matt Murdock’s associates, Foggy Nelson and Karen Page (played by Elden Henson and Deborah Ann Woll, respectively) do have this weird chemistry together that works for them.

Despite everyone giving really great performances, my favorite character from the series wasn’t really featured that much in the comics. In fact, I think he was actually based on a character from the film. Toby Leonard plays James Wesley, Wilson Fisk’s right-hand man. He’s very reminiscent of the Wesley Owen Welch character of the movie… who was Kingpin’s number two as well! Here, Wesley is a fleshed out character. He’s incredibly loyal to Fisk but still manages to show how incredibly smart he is throughout the series. 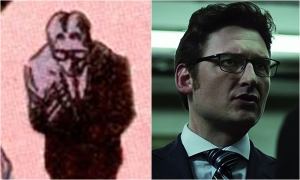 Mousy in the comics. Badass in the series.

While everything is pretty much pitch perfect, there are a few things that bothered me about Daredevil. And those things have to deal with a few dangling plot points that were never tied up when the entire 13-episodes drew to a close. They don’t really stick out like sore thumbs or anything. But they are pretty annoying. They will probably be answered in either Season 2 or maybe in one of the other Marvel-Netflix series that’s going to be popping up soon. But that’s the only issue I have with the series in general.

Overall, Netflix’s Daredevil has set the bar pretty high for future television shows. I hope they have the capacity to keep it up with AKA Jessica Jones, Luke Cage and Iron Fist series they have brewing. If they do, well, that just means that Marvel doesn’t have to rely on big blockbuster films to keep people invested in comics.

Have you seen Season 1 of Daredevil? What did you think of it? Let me know in the comments section below!

One thought on “I’ll Review Anything: Daredevil (Season 1)”