With Man of Steel getting positive but not glowing reviews, it was still fun to watch an honest to goodness Superman film on the big screen. But, if you watched it and felt you needed more from The Last Son of Krypton, Superman Unbound has you covered… but may leave you still feeling underwhelmed.

Superman Unbound is based on the Superman: Brainiac story arc in 2008. Just as a quick summary to the story, Superman attempts to find Brainiac, the same being that stole the city of Kandor from Krypton, but inadvertently leads Brainiac to Earth. Now, Superman, along with his cousin, Supergirl, must prevent Brainiac from doing the same thing to Metropolis.

The first thing that struck me was the animation style. Everyone’s face are drawn kind of weird. Superman’s face is extremely long and drawn with pointed angles that look sharp enough to cut paper with. Lois Lane’s design also didn’t look good because her face didn’t look “soft” enough. Supergirl’s head seemed a bit too large for her body. Only Brainiac’s design worked well for me.

I’d flip off the person who designed your look, too, Lois.

The voice acting was just passable. I’m a big fan of TV show Castle, where Stana Katic and Molly Quinn are mainstays so I was excited to see what they would do with Lois Lane and Kara/Supergirl, respectively. They did an okay job with their role but nothing spectacular. Matt Bomer from White Collar was much better in the titular role of Clark Kent/Superman. John Noble, from Fringe fame, did the voice of Brainiac and he stood apart from the rest. But maybe that’s because he really didn’t have to show that much emotion (since he’s playing a robot of some sort). 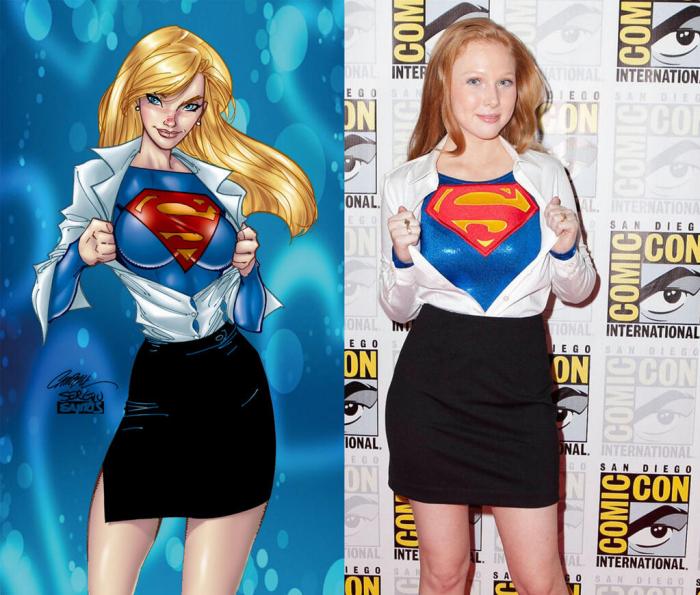 Molly Quinn did a passable job in the role of Supergirl. Not a Super job.

The action sequences were good and fun to watch but kind of filled with inconsistencies. The first time Superman encounters one of Brainiac’s drones, he has a difficult time taking it down. But, later on, he has no problems smashing them to pieces quickly. Why was he having so much difficulty before? Even Lois manages to take one out… with a chair!

Overall, Superman Unbound is a passable animated film. More rabid Superman fans may have more fun that I did while watching it. It’s worth renting out if you have the ability to do so.

If you’ve watched Superman Unbound, let me know what you thought about the movie in the comments section below.

One thought on “I’ll Review Anything: Superman Unbound”