Comics are weird. I love them but comics are weird. At times, they can tell exciting adventures and even tell thought provoking stories. But there are times when comics just tell really insulting stories that just makes us cringe. Of course, as this is comics, some of these cringeworthy story arcs are erased from existence with the thankful help of different retcons and such. Sometimes, however, some of these audacious tales aren’t retconed and have remained part of the actual story continuity for inexplicable reasons.

Essentially, these are terrible stories that happened to the characters but are never really referenced in the future. I guess the writers are just hoping that the readers will forget them and, sometimes, we do. But there are still some of us that are sticklers for details… like me. Here are just five story arcs from comics that are still canon but are hardly mentioned anymore.

I don’t know anyone who doesn’t like Gwen Stacy. Sure, you may think that Mary Jane may be the perfect match for Peter Parker/Spider-Man, but no one dislikes Gwen Stacy. Her death at the hands of Norman Osborn/Green Goblin was a gut punch that no one has really recovered from and she is one of the few comic book characters that has stayed dead since her demise. In short, people liked Gwen Stacy… but Marvel didn’t do her any favors by roping her into the entire Sins Past storyline!

In Sins Past, it was revealed that Norman Osborn seduced one of Peter Parker’s love interest, Gwen Stacy. Out of this union were twins, Gabriel and Sarah Stacy. Gwen decided to keep the twins a secret from Peter… but not from Mary Jane! After Gwen’s death (at the hand of her baby-father, apparently), Norman spirited away the twins and, thanks to him having Goblin serum infused semen, I guess, both Gabriel and Sarah aged really fast and were gifted with enhanced strength and agility. He then sold them the story that it was Spider-Man that killed their mother so they both went after him.

2. Wonder Woman Minus the “Wonder”

Wonder Woman is probably the most well-known female superheroes in the world. Not only that, she’s one of the most powerful heroes in the DC Universe, period. So, what did DC do in the ’70s? Take away all her powers and make her a super spy who runs a fashion boutique on the side. Wonder Woman essentially gave up her powers to be with her man, Steve Trevor… who promptly died soon after. Groovy.

To be fair, DC’s heart was in the right place when they made the decision to strip away Wonder Woman’s powers and abilities. It was the ’70’s and they wanted Wonder Woman to represent the modern strong and independent woman of the time. They were hoping the change would empower young girls to believe that they can survive and even prosper in a man’s world whether they have superpowers or not. Unfortunately, they kinda forgot that Wonder Woman was already a feminist icon by simply being more powerful than most men because of her Amazonian heritage.

DC took a lot of flak for this change, especially from feminist groups, which, ironically, the demographic they were trying to please. They eventually did give Wonder Woman back her powers and even brought Steve Trevor back to life. So this was essentially a zero sum game as everything returned back to normal. I wonder what happened to her fashion boutique, though.

It wasn’t only Wonder Woman that got a huge revamp. Superman wasn’t immune to DC trying to adjusting him to make him a little more fresh. Unfortunately, what else can they do besides killing him again? Make him into pure energy. Yay.

The origin of the Electric version of Superman is pretty vague. Generally, he just developed these powers after being deprived of solar energy for a while. Slowly, the Man of Steel just started turning into pure energy and developed new abilities because of these changes. He wasn’t invulnerable but he could render himself intangible. He could also turn himself into a regular human being so that his Clark Kent guise. He also had the ability to absorb all kinds of energy and he got a few new vision powers.

Eventually, Electric Superman split into two entities. The blue colored one was more tactical and would rather think his way through problems. The red colored Superman was more brash and more willing to use force. This caused problems for his wife Lois Lane who actually kicked both Supermen until the figured out a way to merge back into one body. Both Supermen eventually did… for no apparent reason. Possibly because they saved the world and they felt that they could or they just ran of of the energy that made them Electric Supermen. Whatever the case, this has never really happened again but I think his Electric Superman outfit is still stored in the Fortress of Solitude somewhere.

4. Ms. Marvel gives birth to the man that impregnates her

Oh, God. Where do I even begin with this? This is probably one of the most twisted stories ever to be released in comics. The weird thing is that no one really gave it a second thought when Avengers #200 essentially told the story of Ms. Marvel’s rape by her own son.

I wonder if Toys ‘R’ Us is still pleased with their association with this issue?

The story goes that Ms. Marvel mysteriously became pregnant and gave birth in three days. The child, named Marcus, grows up rapidly. He explains that he was trapped in a dimension without time and decides that it sucks. But, instead of, I don’t know, calling for help, Marcus decides to kidnap a woman, teleport her to this timeless dimension,  impregnate her with himself, return the woman back to Earth and be born. It just so happens that the woman he chose was Ms. Marvel because, wait for it, she looked exactly like his own mother!

It gets weirder still because, after abducting Ms. Marvel, he doesn’t outright rape her. No, he uses a mind control device to make Ms. Marvel sexually attracted to him before the actual sex. So, it’s a high tech manner of date rape. But Marcus’ escape from his dimension causes all sorts of trouble for Earth, such as dinosaurs appearing out of nowhere and the only solution was for him to return to his original dimension.

Who needs flowers and chocolates when you have a mind control machine, am I right?

Now, here’s where things get even more twisted. Ms. Marvel decides to go with Marcus because she says she had developed feeling for him… not as a mother but as a lover! Yes, this is some weird Stockholm Syndrome here and it was perfectly acceptable apparently because no one raised an eyebrow that Ms. Marvel was running away with her rapist and none of the Avengers thought of stopping her! Even after Marcus admitted that he used a mind control device to convince Ms. Marvel to have sex with him!

Thankfully, Ms. Marvel managed to return to Earth after Marcus died. With the help of Professor X of the X-Men, she regained control of herself and let the Avengers have it regarding their weird nonchalant reaction to her rape and her giving birth to her very own rapist. Still, a little too late, Marvel!

5. Superboy Finds His Kryponian Parents… and Totally Forgets About Them

Everyone knows Superman’s origin, right? Rocketed to Earth by his loving parents Jor-El and Lara before the planet Krypton explodes, Kal-El is adopted by the loving Jonathan and Martha Kent and the the baby grows up to become Superman, the defender of truth, justice and the American way. Except it turns out that Jor-El and Lara didn’t die on Krypton and managed to launch themselves in space as well! 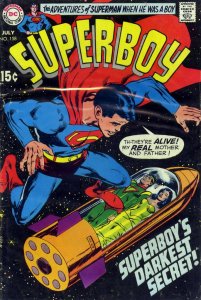 In the issue entitled Superboy’s Darkest Secret, it’s revealed that Superboy’s parents had escaped Krypton as well and put into suspended animation by one of Jor-El fellow scientists. The rocket containing them has sent out a distress call but it was a trap by one of Jor-El’s rivals… because there have been so many Kryptonians that managed to escape and being called the Last Son of Krypton doesn’t mean all that much, apparently. Anyway, the bad guy is defeated and Superboy attempts to open the rocket to revive his biological parents. However, a recording is played during this, asking Kal-El that, if he does find them, he shouldn’t revive them!

It’s revealed that Jor-El travelled to Krypton’s core to substantiate his hypothesis that Krypon was dying and was bombarded by kryptonite radiation. He inadvertently transferred this radiation to Lara when he reached the surface. If they are resuscitated, the kryptonite radiation will slowly kill them painfully. So, what does Superboy do? Does he hide the spaceship and try to find a cure? Does he revive them and send them to the Phantom Zone so they won’t die? Of course not! Superboy files the rocket back to space and this is never mentioned again!

You’re really gonna leave your parents out there in space? What a dick move!

This is a terrible story as it kind of destroys Superman’s origin. I get that Superboy may not have the means to cure his parent’s kryptonine poisoning. But surely Superman has the tools to do so. Or he can enlist some of his Justice League pals or even talk to some of the Legion of Super-Heroes in the 30th-century for assistance? Nope, better to leave them out in space!

Any comic book reader knows the Death in the Family storyline from Batman. This is the story arc where the Joker beats and murders Jason Todd, the second Robin. However, what’s generally lost in the shuffle is why Jason Todd died. It wasn’t an editorial decision nor did they want to write something interesting or give Batman a bigger reason to hate The Joker.

Yes, people paid 50 cents just to kill off Jason Todd. That’s how much they hated him.

It was a ballsy move by DC to set up a number for fans to call and decide if Jason Todd was to die or live. But fans were already displeased with this new brash and brutal Robin and decided to kill him off. It was extremely close, with just a few votes separating both sides but the “Robin must die” side won by the narrowest of margins. A Death in the Family has become a landmark storyline in the Batman franchise but most people seem to have forgotten that it was the fans, not the Joker, that actually killed Robin.

Do you know of any other forgotten comic book story arcs that are still canon? Let me know what they are in the comments section below!