Since 2013, we’ve been getting two Marvel Cinematic Universe films each year and now’s just about time for our first MCU treat – Captain America: Civil War. Before the movie comes out though, I’d like to talk about the “leaders” of the two opposing sides in Civil War and why they’re on the side that they’re on. I’m writing about this because I read some comments somewhere from people who didn’t buy how Tony Stark was pro-government all of a sudden, or how Steve Rogers is supposed to be a soldier who is trained to follow orders.

Well, since their solo movies, both characters have experienced character developments that explain what their stand is when it comes to superhero accountability. Of course, I haven’t seen Captain America: Civil War yet – I know that both Steve Rogers and Tony Stark will have more than one reason, more than one argument, to justify their stance. I won’t be covering those and will only focus on what we’ve already seen onscreen thus far. Today, I’ll take the easier route and go through the key moments that put Captain America on this path.

Before I start, a spoiler warning – I’ll be talking about details from all the MCU Films that featured Captain America so if you haven’t seen those, you might get spoiled. This list includes both Captain America movies as well as the two Avengers films.

It’s true that Captain America is a soldier who is expected to follow orders but very early on, he already showed that he’s willing to act on his own. In The First Avenger, Cap wanted to save Bucky’s captured military unit but his effort to mount a rescue mission was shot down. Rather than stand down as he was told, he rescued the captured men all by himself.

Cap tried to propose a rescue mission but was shot down.

But that’s not when the seeds of his distrust towards the government were planted – that happened during the events of The Avengers. Steve Rogers was actually trying to get the rebellious, anti-authority Tony Stark in line, even telling Stark that “We have orders, we should follow them.” This moment is actually quite ironic because it was Stark who told Rogers not to trust Nick Fury.

Well, guess what he found when he listened to Stark? 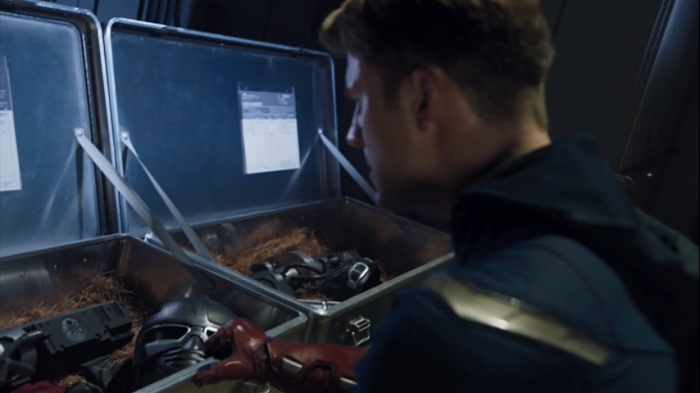 Cap discovers the Hydra gear on the SHIELD Helicarrier.

That’s right, Hydra gear. The group eventually found out that S.H.I.E.L.D. planned on using the Tesseract to build weapons of mass destruction, which Fury justified as a way of dealing with superpowered beings such as Thor.

This was only the start though – Rogers still continued to work with S.H.I.E.L.D. after the attempted Chitauri invasion. But in The Winter Soldier, more seeds of distrust were planted. First, while on a supposed hostage rescue mission, he finds out that Black Widow was given a set of orders that he wasn’t looped in on. This made him doubt Black Widow’s true motives and made him question Fury further.

Cap finds out about Black Widow’s “other” mission.

This prompted Fury to reveal Project Insight to Rogers: three upgraded Helicarriers that never need to refuel thanks to Stark’s repulsor technology. These Helicarriers were designed as a preemptive response for eliminating potential threats – something that Steve Rogers strongly disagreed with.

In my opinion, there’s already enough here that would make me distrust S.H.I.E.L.D. – Hydra weapons, plans for a Tesseract-powered W.M.D.s, and now Project Insight? Well, it gets worse.

A lot more happens in the film but let’s skip to the important part, when Cap and Black Widow discover that Hydra was able to infiltrate different governments and even S.H.I.E.L.D. itself. Hydra even planned on using the Project Insight helicarriers as a means to attain world domination by eliminating those that can oppose them.

Captain America started off as a good, obedient solider. Going through these events, isn’t it easier to understand why he would be opposed to having to report to another governing body such as the United Nations? I mean, if Hydra was able to worm it’s way through S.H.I.E.L.D. and even plant sleeper agents in the U.S. Government, why wouldn’t Hydra be able to do the same with the United Nations leadership?

And we haven’t even factored Bucky in this equation. Knowing what he knows, can Steve Rogers trust other people to act in Bucky’s best interests? What if, rather than being rehabilitated, someone from Hydra or anyone with evil intentions from high above the ranks has plans of using Bucky as an assassin again? If you were in Captain America’s position, would you hand Bucky over?

I hope this was able to illustrate Captain America’s stance for the film. Again, he probably has other reasons for taking a stand that will be shown in Captain America: Civil War, but just revisiting these other movies should already explain this. Next week, I’ll tackle the opposing side and go through Tony Stark’s experiences to explain why he’s going against Captain America.

Before I do that though, what side are you on? Team Cap or Team Iron Man? Let us know who you’re rooting for by leaving a comment or two below!

4 thoughts on “Civil War Primer: Why Steve Rogers is Anti-Government”