One of the few mysteries of the Marvel Cinematic Universe, the location of the Soul Stone is one of the most popular (at least, from my observation). Heck, I wrote about this very topic last year, before the release of Thor: Ragnarok and Black Panther. I had different theories back then, and with Avengers: Infinity War just around the corner, this is the last chance to correct myself.

You see, in the last couple of months, we’ve received clues about the Soul Stone’s location. We’ve seen so many that, at least in my opinion, shows exactly where the Soul Stone is. I could be wrong again, but like what MatPat of The Game Theorists likes to say, what I have is “just a theory“. Because of these clues though, I’d say this is the most compelling Soul Stone theory available.

Before I talk about each of these clues, I’d like to give the usual spoiler warning first. While I won’t be discussing specifics about Avengers: Infinity War, I will talk about it’s trailer and details about certain MCU Phase Three films as well. I’m also going into a lot of speculation that may ruin Infinity War for some audiences so if you haven’t seen all of the MCU Phase Three films yet or if you want to go into the theaters completely spoiler-free, don’t read on.

Don’t go any further if you don’t want any MCU or Infinity War spoilers!

Let me talk about the first clue about the location of the Soul Stone that I saw, which came via the Avengers: Infinity War trailer. The first trailer, as well as all succeeding trailers after it, depicted a massive battle between Thanos’ forces and the armies of Wakanda. While the trailer did not explicitly indicate that this battle happens at the film’s climax, it has an “Earth’s last stand” vibe to it, what with the Avengers taking part.

Now why would Thanos launch an offensive against Wakanda? He is not interested in taking over the Earth; his mission is to retrieve all of the Infinity Stones so he can achieve his main goal, which is to bring “balance” to the universe. So it’s easy to conclude that one of the Infinity Stones is being kept in Wakanda.

Doesn’t this look like a “final battle” to you?

This doesn’t automatically mean that the Soul Stone is in Wakanda. Maybe the Avengers brought the Vision there, with the Mind Stone still in its forehead. Maybe Doctor Strange decided to hand over the Eye of Agamotto to Cap and had it brought to Wakanda.

But we’re just at the first clue. There are several more that were revealed in Black Panther. One last spoiler warning!

The second clue regarding the Soul Stone’s location was revealed during Black Panther’s intro, which told of a meteorite that crashed in Wakanda. This meteorite would give Wakanda its vibranium, which would help the nation thrive and prosper. It’s not just the vibranium though – when the meteorite crashed, an herb started to grow in the immediate area. The film even explicitly has the line “affecting the plantlife around it” while talking about the crashed meteorite. The intro went on, talking about a Wakandan warrior who ingested one of these herbs and gained superhuman abilities. Now, just the mere fact that something extra terrestrial imbued generations of Black Panthers with these powers should raise eyebrows, right?

T’Challa had the ability to communicate with his father through the spiritual plane.

Clue # 3: Souls of the Fathers

The third clue is what these herbs actually do. Aside from giving heightened abilities to anyone who ingests them, the herbs are also part of a ritual wherein the person ingesting the herbs would be able to visit a “spiritual plane” and communicate with their deceased father’s souls – it happened with T’Challa (twice, if my memory serves me right) and it happened with Killmonger. Again, ingesting the herb allowed T’Challa to enter a “spiritual plane” and talk with T’Chaka’s soul – isn’t that already a big hint as to what powers these herbs? But we have one last clue if you’re still not convinced that the Soul Stone is in Wakanda all along…

When I first wrote about the Soul Stone, I talked about the T.H.A.N.O.S. theory. Essentially, some guy on the internet (not me) said that the first letter of the Infinity Stones formed the name Thanos: 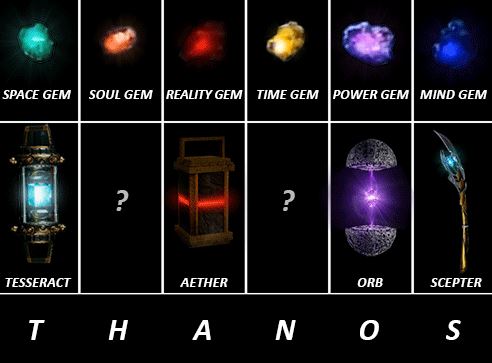 Gem, stone, they’re all the same.

During the time that I first saw this, only three of the six Infinity Stones had been revealed and their names fit the T.H.A.N.O.S. theory well: the Tesseract, the Aether, and the Orb. These names were stated explicitly, and what really stood out to me was Marvel Studios naming what was the Cosmic Cube with a name that started with the letter T.

Did the act of naming the Cosmic Cube, Tesseract, have something to do with the name Thanos?

Since then though, the theory felt like somewhat of a reach. Sure, Loki’s scepter (which housed the Mind Stone) was never called anything but a scepter, so that should count for the S in the T.H.A.N.O.S. theory. But N for necklace was a stretch, considering that the Time Stone was referred to in Doctor Strange as the Eye of Agamotto.

The theory still has flaws. These heart-shaped herbs are not vessels or containers of the Soul Stone (unlike the rest of these artifacts). Necklace and scepter are still common names, as opposed to being proper names. And using “necklace” instead of Eye of Agamotto seems like we’re just forcing these facts to fit the T.H.A.N.O.S. theory.

When they referred to this plant as the “heart-shaped herb”, I was convinced that the Soul Stone was in Wakanda.

But it’s hard not to, especially when all these clues about the Soul Stone exist. Special herbs with a name that starts with H which explicitly were affected by a meteorite from outer space that allows humans to enter a “spiritual plane” – those are too many connections to simply ignore. Add the significance of Thanos seemingly having his eyes on Wakanda at some point in Infinity War, and you’ve got the most convincing Soul Stone theory out there.

One thing that’s for sure, these clues are just clues. We have not seen the actual Soul Stone, so this theory remains to be a theory. Am I, along with everyone else who believes that the Soul Stone is in Wakanda, only seeing what I want to see? Or do these clues truly point to where the Soul Stone is, giving us one of several “A-HA!” moments once we actually see Avengers: Infinity War? We’ll find out next week!

What do you think about this Soul Stone theory? Is there another that’s more convincing than this? Let us know what you think by leaving a comment or two below!

5 thoughts on “Infinity War Primer: The Location of the Soul Stone”