It’s been more than a decade since I last played an NBA video game (last one I really played was NBA Live 2003) so when I picked up a copy of NBA 2K18 for the Nintendo Switch, I was pleasantly surprised to find that the developers included a handful of basketball teams in the past that were popular in one way or another. Teams like different versions of Jordan’s championship winning Bulls teams, several Lakers and Celtics teams of the 80s, historically notable teams like the Nets with Drazen Petrovic, the Run TMC era of the Golden State Warriors, Mutombo’s eight seeded Denver Nuggets, and so on.

However, due to varying reasons, there are several extremely popular teams that were not included in the game. Here are five teams that I think should have made the cut: 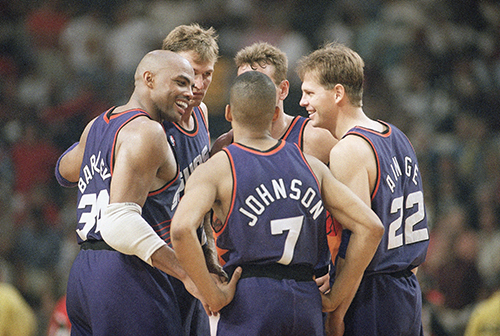 This team was omitted because there were licensing issues with Charles Barkley, which is a shame because this team is one of Phoenix’s best of all time. Featuring Barkley at his best (he won the MVP award that year), this team also included the likes of multiple All-Star Kevin Johnson, “Thunder” Dan Majerle, and sharpshooting vet Danny Ainge.

This team made it all the way to the NBA Finals, losing to the Bulls four games to two. Arguably one of the best teams to challenge Jordan’s Bulls for the NBA championship (having won a league leading 62 games that season) and the best Phoenix Suns team of all time (sorry Nash fans, but none of his teams made the Finals), this team would have been a sure inclusion if not for Barkley’s issues with 2K Sports.

The Rockets team of the 1993-1994 season made the cut but their lineup the following year deserves to be included and in my opinion, if you could feature only one of Hakeem Olajuwon’s championship winning squads, I would choose this one. Aside from featuring one of the NBA’s all-time great centers, the 1995 Rockets also had Sam Cassell in his rookie year, “Big Shot Rob” Horry in his second year and another all-time great and original Dream Team member Clyde “the Glide” Drexler.

If you’re talking about historical relevance, this team meets that requirement: this Rockets squad is the first 6th seeded team to ever win the NBA Championship, sweeping the Shaq/Penny-led Orlando Magic in the NBA Finals. Their victory gave us the Rudy Tomjanovich soundbite “Don’t ever underestimate the heart of a champion!” which gets used frequently in NBA marketing. It should be noted that this is the only team to ever win the NBA Championship with Michael Jordan as an active player of the Chicago Bulls since 1991.

Since 1999 all the way up to 2010, the Western Conference has always been represented by either the San Antonio Spurs or the Los Angeles Lakers in the NBA Finals – except for 2006, when the Dallas Mavericks broke through and made their first NBA Finals appearance alongside the Miami Heat (also their first NBA Finals). This matchup was known for the Miami Heats comeback from being down 2 games before winning 4 games straight to close out the series.

The 2006 Miami Heat is among the classic teams that you can play as in NBA 2K18 and I think the Dallas Mavericks should be represented to, especially since their 2006 roster was radically different from their championship winning squad in 2011, featuring the likes of then stars Josh Howard and Devin Harris in their starting lineup.

I know that NBA 2K18 already features several different incarnations of the Los Angeles Lakers, but there is one championship-winning version that did not get represented in NBA 2K18 – the Shaq-less, Kobe-led squad in the late 2000s. This version of the Lakers is notable due to several reasons – these are the teams that Kobe won championships with without Shaq, this lineup also has the prime versions of Pau Gasol and Lamar Odom, and they won two championships in consecutive years, making Finals appearances in three straight years.

Again, I know that the game has several different versions of the Lakers already, but why not drop one of the existing ones? Who cares about the 1998 Lakers that got swept by the Utah Jazz in the playoffs? Drop that and make room for this team.

By the way, I’m choosing the 2010 Lakers team because (1) they faced their longtime rivals the Boston Celtics (the 2009 team were matched up against the Dwight Howard Orlando Magic) and (2) because they won the NBA Championship (the 2008 Lakers lost to the Celtics in that year’s finals) 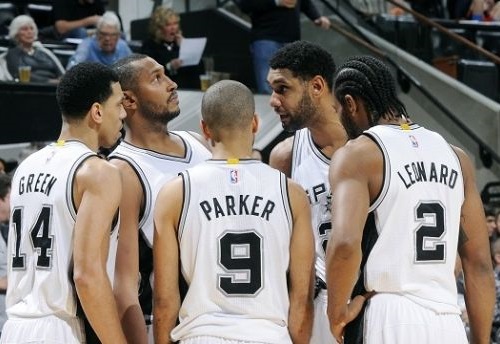 Despite being another team that is represented in different incarnations throughout the years, the San Antonio Spurs deserves to have it’s 2014 championship lineup in NBA 2K18. The 2014 Spurs team had a great combination of longtime Spurs vets like Tony Parker, Tim Duncan and Manu Ginobili play with newer players like Danny Green, Tiago Splitter and the budding superstar Kawhi Leonard. In terms of gameplay experience, this team is one of the most solid lineups ever, featuring both a strong starting lineup and good supporting players from the bench.

Their 4-1 thrashing of the Miami Heat featured some of the best passing plays by any given team in history (only the 1986 Celtics team comes to mind with a similar style of play) and is the last time that all-time Spurs great Tim Duncan hoisted the championship trophy (as well as Kawhi’s first ever NBA championship). This team should have been included in NBA 2K18.

Also known as the Dream Team, the US Olympic Men’s Basketball team featured some of the best NBA players of the late 80s/early 90s era – the era when I learned to appreciate the NBA. Most of the team’s members were just at their prime (or maybe a little past it) and represented the transition between the Bird/Magic era and the Jordan era.

The entire team was inducted into the Basketball Hall of Fame and most of it’s members have been inducted to the Hall of Fame individually as well. This team was probably cut due to 2K’s issues with Charles Barkley (including the team without him just isn’t the same) as this team was in NBA 2K17. I would have enjoyed playing this game using this historic gold medal winning team.

And there you have it, the five basketball teams not included in NBA 2K18 that I wish I could play as. Note that this list is based off of my personal opinions and is from the lens of a guy who started being aware of the NBA in the early 90s, so my perspective is limited. Are there any other exclusions that you wish were included in the game? Let us know your thoughts by leaving a comment or two below!