Dragon Ball FighterZ just came out and I’ve been having a blast with the game. Although I’ve only had the game for a couple of days now, there’s a lot to Dragon Ball FighterZ that makes it a very exceptional fighting game. The game looks like the anime come to life and the controls feel very responsive. The action is also super hectic and over the top, much like all of the fighting in the anime as well. There’s also a lot of fan service, such as character interactions and special cinematic finishes that look like they were plucked directly from the show, which is amazing to say the least and always brings a smile to my face when I see them.

However, this is a game that I know I will never get really good at or get at a high enough level that I could actually go online and body someone with a super destructive combo. This is because fighting games are hard. Although I love me some fighting games and I’ve certainly played more than my fair share of them, I do know that really getting to a high enough level to really get the most about each and every one of them takes a certain amount of skill to get to a tournament level of greatness. I bet anyone who picked up a game like Dragon Ball FighterZ, Street Fighter, Tekken or any other fighting game out there knows this and this is what separates the casual player from the pros. But why exactly are fighting games difficult to get good at?

One of those reasons is that every fighting game feels different from each other in some radical ways. The rules and mechanics are never similar. Even if the game is a sequel to a long running series, sometimes the developer will add or change some gameplay mechanics so it feels like playing a totally different game. This it totally different from other game genres. If you’ve played Quake or the first Unreal Tournament, you can generally jump into an Overwatch or Team Fortress match with very little issues other than figuring out which character to pick. That’s because they feel rather similar to each other, despite Quake and Unreal Tournament being decades older than Overwatch and Team Fortress.

While the fundamentals may carry over from fighting game to fighting game, each of them just feel different because of the varied game mechanics and rules each game has. Take the Street Fighter series for example. Each entry in the series always added some new wrinkle to the gameplay. Street Fighter II was incredibly basic but added a Super meter to mimic King of Fighters’ power gauge. Street Fighter III added EX special attacks, the ability to pick your Super Art and the parry system. Street Fighter Zero/Alpha allowed you to block while jumping as well as included Alpha/Zero counters and, in Street Fighter Zero/Alpha 3, allowed players to select different “grooves” or styles of play. Street Fighter IV added the Ultra meter and added the Focus system. Street Fighter V, the latest game in the series, has the V-System, which gives each character different abilities, and each character has two V-Triggers you have to pick before you start a match. That’s all from one series and, while you can jump into a match if you played any of the previous games, you have to master each system if you want to really play at a competitive level.

Adding to the problem is the combo systems as each game has different methods on how you can continuously damage your foe and how you block damage. Street Fighter relies more on linking attacks and cancelling them into special attacks. Tekken allows you to sidestep attacks and lets you juggle your opponent in the air with a flurry of punches and kicks. Dragon Ball FighterZ focuses on launching your foe into the air and pummeling them with air attacks and double jumps. You have to learn each system and, since they’re all different, it can be difficult to grasp one system when you’ve gotten so used to another one.

There’s also a matter of the number of characters each fighting game has. It’s normal for a new fighting game to have at least 16 characters once the game is released. Even then, there will be fans that will complain that 16 characters is a very small roster. Each character has their own strengths and weaknesses. If the game is well balanced, meaning that there isn’t one character that will easily beat every other person, a competitive player will have to figure out some specific strategies to utilize their main character’s strengths while covering up their weaknesses… against each other person in the roster! You need to get familiar with these matchups so you can formulate strategies to target your opponent’s character’s weaknesses yet still overcoming their strengths. You don’t want to let a grappler get close to you so you try to find ways to get them in that range where they can’t dominate you with throws. But at the same time, you want to close the gap against characters who are good at doing damage at long range.

Another factor that makes getting good at fighting games hard is that it’s a single player experience. Most competitive multiplayer games usually pits teams against each other. You can rely on teammates in the more popular competitive games like League of Legends and DOtA to take up the slack. In fact, you need to rely on them as each and everyone in the team has a role to fulfill. You’ll need the Carry to power through the later portions of the game. You’ll need Junglers to get the gold and items for the rest of your party early on. There are Gankers to help out during the middle portion of the match, who can actually be more of a threat if they get the advantage relatively early. There are more roles but you get the idea. League of Legends and DOtA follows the “no man is an island” matra very well.

With fighting games, you have to rely on yourself, period. You may have some support from your friends and, if you’re part of a professional team, your fellow sponsored teammates. But whenever you’re in a match, you’re on your own. You’re the one who’s going to be doing all of the attacking, defending, reading of your opponent, reacting to moves and such. You’re going to win and you’re going to lose… and a lot of people have a problem with the losing bit. 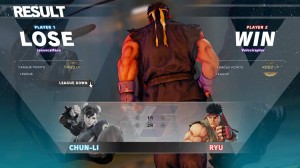 They even blurt it out for everyone to see.

The reason you lost is almost always going to be your own fault. You can’t blame your teammates because you don’t have any teammates in a fighting game. You can’t blame your opponent for picking a character that counterpicks your own because it’s still your responsibility to find answers to whatever strengths that character has over yours. If you missed a long combo string, well, you better practice that long combo string a whole lot more so you don’t! While practice does make perfect for every competitive game, not many people have the patience to hunker down and spend hundreds of hours training on one game, learning all the tricks and gimmicks of each and every character so that they know each and every match up.

There’s also the matter of learning the most damaging combos available for your characters and rehearsing them ad nauseam so you can pull them off on a mostly regular basis. Once again, the individual game’s mechanics will come into play as they all have different combo systems as I mentioned earlier. You have to sort of rewire your brain for every fighting game you play because of this. I can personally do most of the combos in Street Fighter V but Dragon Ball FighterZ’s combo system, with the launchers and double jumps will take some getting used to. But, if I really want to be competitive in the game, I have to get used to doing them consistently.

However, the biggest reason why a lot of gamers never get to a competitive level is their ego. The only real way to get good at any fighting game is to play against other people and, well, you will lose. No one can ever win 100% of the time, especially today with so many gamers getting into fighting games. And losing is terrible on the ego. It’s so easy to say that a game is too complicated and quit because it’s too hard, especially if you’re just starting out. This is the greatest barrier fans have to overcome; they have to suck up the losses and actually learn from them. They have to adapt and improve to get better and it’s difficult to get over the thought that we suck at something. But most of us will suck at anything, particularly if we’re just trying something out for the first time. It becomes a matter of patience and endurance of trying to get better, not natural skill.

Yes, fighting games are hard to really get good at because of all those little things I mentioned above. So, why do I love them? Well, they’re just plain fun! There is something about learning a totally new system and mechanics and then getting good enough to just win. It is painful at times but, if it were easy, everyone would be playing fighting games at high levels!

Besides, even if you do continuously suck at fighting games, it’s still a blast to watch high level play, right?

Are you good at any particular fighting game? How did you get good? Let me know in the comments section below!