True story. Back when I was working as a quality assurance supervisor, my boss called me in and told me that one of my peers filed a complaint against me for being disrespectful during one of the meetings. When he told me about this, I was actually confused because I couldn’t figure out what he was talking about. It turns out the guy felt like I wasn’t paying attention to him while he was talking because I was playing with my little mini Transformer I have with me during all of the meetings. Thankfully, my boss understood my situation since he knew fidgeting with something actually helped me pay attention to what’s happening to me.

I’ve actually always been like this ever since I was young. In fact, a lot of my teachers would get mad at me because I would always be doing something else during lectures. Whether it be playing with my pens, folding origami, drawing or the long list of other “offenses” I would do whenever the teacher is talking, I actually always found it beneficial for me so that I could concentrate better at the lessons. Maybe I wouldn’t have been scolded too often if I had myself a Fidget Cube growing up. Or, at the very least, a fake ones like the one I recently got my hands on.

For those not in the know, the Fidget Cube is a kind of toy that is supposed to help fidgeters and, more specifically, those with some kind of hyperactivity disorder so they can actually focus on other activities better. If you ever seen one of those spinners that have gotten incredibly popular recently, then you’ve seen a fidget toy. However, unlike spinners which only do one thing (spin around), the Fidget Cube is a… obviously, it’s a cube… that allows the fidgeter to do six mindless activities. So, more bang for your buck. But is it worth getting when there are much cheaper alternatives like, well, pens and other things you can find handy?

Unfortunately, as much as I would want to get on the real McCoy, I can’t. I could probably order a real one from Antsy Labs, the geniuses behind the Fidget Cube, but that would take some time and would be extremely expensive to ship it here to the Philippines. So I got the next best thing: a knock off Fidget Cube. I just happened to be passing by some small kiosk and they were selling it so I got one. However, if anyone from Antsy Labs just so happens to be reading this review, well, I’m totally fine with getting a review copy of the Fidget Cube *wink, wink*. 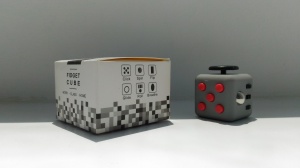 The box just screams “knock off”

Now, the knock-off Fidget Cube does look identical to the real version. Visually, it duplicates all of the six sides of the original. The “top” part has a little thumbstick much like you would have on a video game controller. The “bottom” has a kind of a divot that you can rub with your thumb. The rest of the other four sides are filled with various doohickeys like a switch, a spinning knob, five buttons and one that has a trackball like thingie accompanied with three dials. So, there is a lot you can fidget with with the Fidget Cube. But how many of those sides are actually worth playing with?

Contrary to what some online videos may say, there isn’t a “right” way to use a Fidget Cube and how certain sides are supposed to soothe you. From my experience with the knock off version of the Fidget Cube, each side does have a different feel to it and it’ll probably come down to personal preference on which sides work best for your fidgeting. I will say that the “bottom” part with the divot is pretty much a farce. I rubbed the little smooth crater and it did nothing for me. The second side that doesn’t work for me would be the spinning knob but that would be of no fault by Antsy Labs. Rather, it’s because the knock off version I got doesn’t turn smoothly! My fake Fidget Cube’s dial feels incredibly stiff and doesn’t roll around smoothly and easily. The real one probably works much better. I guess this does serve as a warning to get the original.

The rest of the other four side, well, are just fun to play and fidget around with. The five button side is great as it kind of feels like your popping bubble wrap whenever you press the buttons that give off a clicking sound. The other two buttons that don’t click, well, pressing them just doesn’t feel as satisfying. I actually like to put my thumb over the three clickable buttons and roll my thumb on them so they make three quick clicking sounds. It’s just so satisfying to do! The side that has the shiny trackball with the dials are a wealth of fun as well. Rubbing and rolling the ball feels really good and I love that you can also push the ball inward like a button. The three dials were fun at the start because of the ratchet-y feel but, since I got the knock-off version, the clicking part gradually wore out. Right now, only one of the dials still has the ratchet-y feel and the other two just spin real quiet like without a hint of resistance. Like I said, buy original Fidget Cubes, kids!

The final two sides are the ones that may be the more simple ones but feel the most satisfying. The flip switch is great, especially if you like to chew on your pens like I do. While you’re not biting anything, swiftly alternating the switch rapidly kind of made it feel like I was biting of the tip of my pen. I can’t really explain why but, whenever I do feel the urge to raise my pen to my mouth, clicking on the flip switch makes it go away. The best side would definitely be the “top” part of the Fidget Cube, which is the thumbstick. As someone who plays video games, it does fulfill the need to move your fingers around. However, the reason why I love the thumbstick is because, like most modern controllers, you can push the stick inwards like it was another button. It does simulate the clicking of the button on a retractable pen. However, I actually think this is a manufacturing flaw as I don’t think the “real” Fidget Cube’s thumbstick is supposed to to this. I guess there is an advantage to buying the knock-off version?

Much more satisfying that that silly divot at the bottom!

From my experience with it, the Fidget Cube also has a seventh and undocumented fidget function: the entire cube itself! There were times when I had the Fidget Cube in my hand and I would find myself just playing around with it like it was really huge dice. There’s a kind of sensory overload at the start as a part of your brain is trying to figure out what part of the Fidget Cube you’re holding and if you should stop to play with that side. The urge does subside but it still feels really good while it’s happening.

I guess the most important question is: does the Fidget Cube, even the fake version, help fidgeters focus better? Well, I would say yes! I wouldn’t say I have a hyperactivity disorder as that would be insensitive of me to those have actually been diagnosed with a issue and I have yet actually get tested. But I will say fooling around with the Fidget Cube in my hand has helped me concentrate without distracting anyone else. I am a chronic pen chewer and I understand it’s a terrible habit and incredibly distracting to others. But, as long as I have the Fidget Cube in my hand, hidden from view, I can casually flick the side with the switch and I don’t feel the need to bite on the tip of my pens! 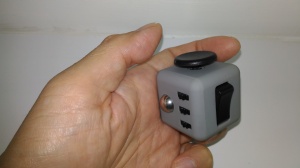 You’ve saved dozens of pens from the wrath of my teeth, Fidget Cube!

With that being said, I will say that the Fidget Cube, as a toy, is incredibly boring. I can’t really see anyone having hours and hours of enjoyment with it like they would do with a spinner. The Fidget Cube feels like a great low-key way to fidget without anyone wisening up that you’re hiding your twitchy mannerisms. That means I can’t recommend it to those that don’t actually have the urge to move around when they have to sit still. However, I will say that the Fidget Cube, even the knock off version, is a wise investment to those that do.

Oh, and Antsy Labs, my door (and my mailbox) is always open for a original Fidget Cube. *wink, wink (again)*

Have you tried using a Fidget Cube? Tell me your experience with it in the comments section below!