Despite all the undeniable critical acclaim that the Legend of Zelda franchise has been getting all these years now, the property itself is far from perfect. One common criticism of the series is that since The Legend of Zelda: A Link to the Past was released for the Super Nintendo Entertainment System, the series has become far too formulaic.

And as a long time Zelda fan, I’d have to agree with that. Before Breath of the Wild, you’d know what to expect in a Zelda game: a well-polished game following a long established formula of restricted world exploration, tackling dungeons in sequence, and obtaining new items that would help you explore more of the game world. Sure, there are some titles that would allow you to “break” the formula via glitches, but each and every main title in the series has this formula. This is one reason why, despite improved technology, none of the subsequent Zelda games has come close to the reception that Ocarina of Time received. Interesting tidbit – Ask any Zelda fan to rank the Zelda titles and a significant majority would name Ocarina of Time or A Link to the Past as number one on their list.

Right now, Breath of the Wild is being praised by many for it’s return to the classic, truly free open world approach of the original Legend of Zelda game. What I want to emphasize right now though is a Zelda game that I think helped Nintendo evolve the franchise to what it is right now: A Link Between Worlds for the Nintendo 3DS. 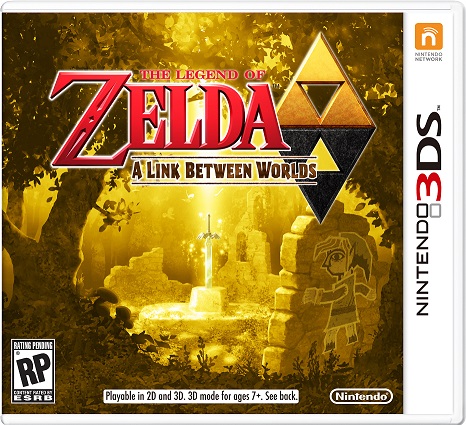 Box art for The Legend of Zelda: A Link Between Worlds for the Nintendo 3DS.

Thanks to the game’s developers, what started as a remake of A Link to the Past evolved into one of the more revolutionary titles in the franchise. Essentially, A Link Between Worlds is a sequel to the aforementioned game – it happens in the same version of Hyrule, only several years into the future – so most of the latter’s world as well as it’s core gameplay mechanics such as a top-down perspective are quite similar to the former. 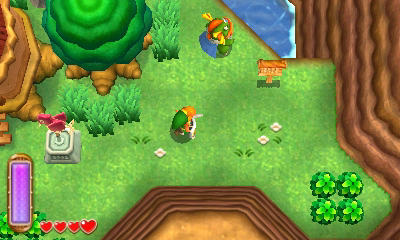 A Link Between Worlds is a return to classic 2D action/adventure Zelda gameplay.

One of the new mechanics of A Link Between Worlds that was marketed is Link’s wall-merging ability. While it’s not as revolutionary as the other changes that I’m going to talk about next, I’d like to talk about this as it helped justify rendering the game in 3D despite it’s gameplay being in 2D. Link, early in the game, will gain the ability to become a wall mural. This mechanic changes the perspective from top-down to a side view and adds the third dimension to the mechanics – you now had to look at walls and other vertical surfaces as another “floor” to “walk” upon.

The wall-merging gameplay mechanic not only allowed for a different perspective but also opened up new ways of puzzle-solving.

What really opened up the world of A Link Between Worlds is how the game looked at it’s item/equipment system. Again, prior Zelda games have become quite formulaic in how they handled items – you have a world filled with obstacles that restricted exploration, such as large gaps or rocks/boulders, or rivers/oceans. Early on, you won’t be able to get past these obstacles without the help of a specific item, which can only be obtained in dungeons. This resulted in linear gameplay – you had to attack dungeons in a certain order because of these restrictions.

In A Link Between Worlds, this is no longer the case. At a certain point in the game (and quite early on), you gain access to Ravio’s Shop where you can rent/buy most of the necessary in-game items – as long as you have the money for it.That’s right – as long as you can afford it, you can get early access to what you need: Bombs for destroying rocks and cracked walls, the Bow and Arrow for hitting switches from a distance, the Hookshot for crossing over gaps, the Fire Rod for lighting torches, and so on.

Unlike the Zelda games that came before it, you’ll have access to almost all of Link’s items as soon as Ravio opens his shop.

With the move to a less restricted gameplay environment, the dungeon design philosophy of A Link Between Worlds was also changed. The dungeons in A Link Between Worlds now involve puzzles with multiple solutions, anticipating that players will have different items in their inventory when they take these on. Doesn’t this sound like the Shrines in Breath of the Wild? It’s not complete freedom, granted, but it’s more than what you had in previous Zelda games. The resulting experience is similar – I’ve read testimonials online from people who played A Link Between Worlds, talking about how their own experiences varied with friends who also played the game.

In addition to the influence of A Link Between Worlds in the development of Breath of the Wild, I also want to talk about one other aspect of this 3DS gem that I loved a lot – the story. This time around, A Link Between Worlds featured an alternate equivalent of Hyrule known as Lorule. Lorule, being similar to Hyrule, had it’s version of the Tri Force which was destroyed long ago by its residents. Yuga, one of Lorule’s inhabitants, ventured into Hyrule with the intention of reviving Ganon to obtain the Tri Force of Power, thus leading into the events of the game.

Yuga is one of the more memorable Legend of Zelda villains in the franchise’s history.

I don’t want to spoil this game for others who may be interested in playing this so I won’t go into further detail. Let me just say that the plot of A Link Between Worlds had a really good twist that impressed me once it was revealed. See, Yuga filled the role of Lorule’s equivalent of Ganon – I was amazed at what roles the Lorule equivalents of both Zelda and Link played in the overall storyline (minor spoiler – they’re quite involved). The ending was exceptionally pleasing as well, tying everything with a satisfying resolution.

A Link Between Worlds, like the other Legend of Zelda titles that came before it, also received universal positive acclaim from critics – it currently has the third and fourth highest rating of all 3DS games over at Metacritic and Game Rankings, respectively. It was even declared as the Game of the Year in 2013 by GameSpot and the GameFAQs readers – over titles like The Last of Us, BioShock Infinite, and Grand Theft Auto V (Note: they’re the only gaming publication who did this – The Last of Us and Grand Theft Auto V were that year’s biggest winners).

As I said in my previous Zelda articles, people tend to gloss over the handheld Zelda games when discussing the series and I think that’s a shame. A Link Between Worlds is an excellent game, and this is the title that took the first step towards returning to the open world, non linear gameplay that the very first The Legend of Zelda game had. The only negative thing that I can say about this title is that this is a 2D game – today’s gaming audience may not have the palate for these types of games anymore, being fed fully 3D action games for several generations. But that shouldn’t stop anyone who is curious about Breath of the Wild but can’t afford a Nintendo Switch yet – A Link Between Worlds is a well made and highly entertaining Zelda title that should be considered by anyone who wants the Zelda experience.

And that’s it for my unofficial Legend of Zelda month! I’m glad at all the press that Breath of the Wild has been receiving, despite not being able to play it myself. I hope that this also brings some attention to all the previous Legend of Zelda titles because these are all really good games that gamers should experience.