When talking about The Legend of Zelda games, titles released on handheld consoles don’t get mentioned – at least, not in the same breath as games like Ocarina of Time, The Wind Waker, or Twilight Princess. And that’s a shame because these games, despite being smaller in scale and being on less powerful hardware, are full-fledged The Legend of Zelda titles on their own.

Such is the case with The Legend of Zelda: Oracle of Ages and Oracle of Seasons; a pair of Zelda games released for the Game Boy Color. Not only do these two games have to deal with being handheld Zelda games, they were released just before the release of the Game Boy Advance, and games released near/at the end of their console’s lifespan do tend to get ignored. Which is why I wanted to use my space this week to talk about these two Zelda games which are considered to be one of the best to come out for the Game Boy Color. 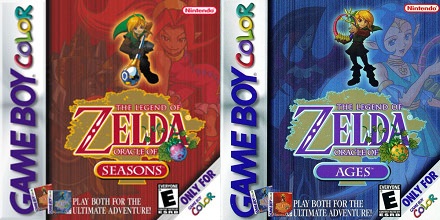 Box art for Oracle of Seasons (left) and Oracle of Ages (right).

On the surface, there doesn’t seem to be anything special about these two games. Both were developed at the same time and both use the same game engine that was used for Link’s Awakening. Unlike other handheld games which were released as pairs but were essentially similar to each other (e.g. the core Pokemon games, the latter Mega Man Battle Network titles), the Zelda Oracles games were two totally different games: they had different worlds and different storylines. Developed by Flagship (a now-defunct game developer under Capcom), Oracle of Ages was puzzle-oriented and had a more detailed storyline while Oracle of Seasons was more action-oriented.

I just played through both games recently and the differences in the two titles were very clear. Oracle of Ages featured a more complicated plot that involved Nayru, the Oracle of Ages, and Veran, the sorceress of Shadows. The game features several cutscenes and its plot actually changes as you progress. Meanwhile, Oracle of Seasons is pretty straightforward and feels very similar to the original NES Legend of Zelda wherein the reason for your adventure is established early on and you stay on this mission up to the end of the game.

And the marketing for the games weren’t kidding when they talked about the differences between Ages and Seasons – you faced much harder puzzles in Ages while Seasons needed you to be good at action-based skills like jumping, fighting, and moving around. This is the first highlight of the pair – it’s amazing how Flagship/Capcom was able to produce two vastly different games using the same assets and game engine, and I’m surprised how game studios don’t do this more often.

What made Oracle of Ages and Seasons memorable for me though were concepts implemented in the pair that increased their replayability. First off are the introduction of animal companions – in both games, Link will meet three different animals in his adventure: Dimitri, a friendly Dodongo who has the ability to swim in deep or shallow waters; boxing Kangaroo Ricky who can hop over small holes and on top of high cliffs; and winged bear Moosh who can hover across bigger holes. You can end up with one of the three as your permanent companion and entire sections of the games will change based on who becomes your permanent companion. This mechanic essentially provides three slightly different playthroughs of each of the Oracles games. 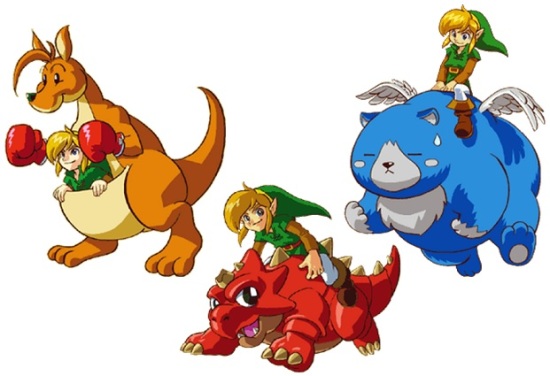 Three friendly animals that will help Link with his quest (clockwise from left): Ricky the boxing kangaroo, Moosh the flying bear, and Dimitri the friendly Dodongo.

In addition to this, the Oracles games feature a password system that will allow you to “link” your playthrough between the two games. First off, upon completing one of the games, you get a password that you can use on the other at the start. By doing so, you start that game with one extra Heart container and all of the rings (a mechanic that I didn’t and won’t go into detail) that you collected in the previous game. In this “Linked Game”, some of the cutscenes and quests will change, and you’ll gain access to both the pair’s final quest as well as the game’s true ending.

You won’t be able to transfer all of your progress into the second game that easily though. As you play the second game, you’ll meet certain NPCs that will ask you to “deliver a message” (enter a password) to specific NPCs of the previous game. When you do, you gain certain rewards (usually item upgrades or power ups) that you can then transfer to the second game via a new password. Most of the time, you’re asked to complete an objective or win at a mini game before you get the reward, so this mechanic also adds to your game experience.

Because of this “Linked Game” mechanic, you end up with two different ways of playing the Oracles games. You can follow the beginner-friendly method of going through Oracle of Ages and then Oracle of Seasons second – the powered up items and rings will definitely help you against the tougher enemies and stages of Seasons. Or you can play Oracle of Seasons first and Oracle of Ages second for a more challenging experience all throughout – you won’t have the additional help of the upgraded items in Seasons, and these won’t help you much when faced with the puzzles of Ages.

Again, this approach to game development amazes me. With the same game assets and engine, Flagship/Capcom was able to produce two games that provided different experiences and because of the password/Linked Game system, you also have a pair of games with added replayability. On my first playthrough more than a decade ago and my current playthrough, I did the Ages/Seasons method and it still took me a combined 43 hours of gameplay with minimal walkthrough/guide consultation. I imagine that doing a Seasons/Ages playthrough would give me another 10-15 hours of gameplay – that’s a lot of bang for the $5.99 price that I paid for to get each of the 3DS Virtual Console versions of these titles.

Because of these characteristics, The Legend of Zelda: Oracle of Ages and Oracle of Seasons remain to be one of my favorite Zelda games of all time. I’m glad I didn’t ignore them when they first came out a few weeks prior to the release of the Game Boy Advance, and I highly recommend them to any Zelda fan who missed out on them.

Next week, I’ll talk about a Zelda title that I think was vital in the evolution of the franchise: The Legend of Zelda: A Link Between Worlds!

Have you played either one of the Zelda Oracles games? What did you think about them? Let us know what you thought of them by leaving a comment or two below!