I have a friend who also plays Clash Royale a lot, and we spend a lot of time talking about the game. Our conversations involve strategies, opinions, and the occasional trash talk. Recently though, we’ve been talking about finally making an in-game purchase in Clash Royale. You see, we’ve been playing the game for months now as free-to-play players and quite frankly, I’m happy with what I’m getting from the game for free.

Another Clash Royale-playing friend of ours, however, has been spending money on the game. So now we’re contemplating on whether we should buy something in-game or stay free-to-play. My friend says she wants to give back to the developers, hence her leaning towards making a purchase. But I’m a little more thrifty and I like thinking things through so I’d like a couple more reasons to justify spending money on a “freemium” game. I think this might be helpful for anyone who is also considering in-game purchases so might as well write about my decision-making process.

In Clash Royale, you buy Gems with real money (PH Pesos on the left, US Dollars on the right). You then use your Gems for in-game purchases.

Back to my thought process… I have several qualifier questions that I ask myself about any in-game purchases including those from paid-for games (like add-ons or DLC). The more questions I answer “Yes” to, the more justified the purchase. So, is making a purchase in Clash Royale worth it? Let’s assess.

Am I Buying Something Permanent?

There are a lot of in-game transactions for different games that are temporary, like additional plays for Candy Crush or one time use power ups to help in difficult missions or stages in other games. I stay away from these, because it really feels like a waste of funds.

When I spend cash on microtransactions, it should be on components that I can use and reuse as I’m playing the game. Some examples of in-game purchases that I’ve made are the DLC characters and stages in Super Smash Bros. or several DLC missions in Fire Emblem Awakening. These additions were things that I’ve played multiple times and that I can still play any time I want.

Of the things that you can buy using Gems in Clash Royale, most are permanent. The cards that you get from the Chests are yours; the card upgrades that you do with your Gold will stick. Tournaments can only last for so long, but they do offer the chance to get cards and are experienced by more than one person. So for Clash Royale, I can answer this question with a “Yes”.

Am I Buying Something That I Can’t Get For Free?

An example of an in-game purchase that can be obtained for free would be the additional plays for Candy Crush wherein all you have to do is wait for your lives to regenerate. There’s something similar in Pokemon Picross wherein you have an in-game resource called Picrites that you need to unlock new areas. I almost bought a bunch of Picrites due to Nintendo’s one-time use Picrites sale (200 for just $0.99) but I decided against it simply because the game allowed me to earn 12-14 Picrites daily – all I needed was some patience and I would have the Picrites that I need in order to advance. And that’s probably very important to consider when answering this question – if I can get whatever it is that I’m buying for free, how long is it going to take to get it? And can I afford to wait?

This isn’t a question that has a straightforward answer though, because it really depends on the situation that you’re in. Currently, I’m prioritizing upgrading my main deck. I don’t have the cards that I need for the upgrades, and buying Chests won’t guarantee that I’ll get the specific cards that I want. There’s an in-game shop where cards can be purchased using Gold but it sells random cards and usually doesn’t have what I want. I’ve been waiting for those cards to show up and have managed to save up enough Gold to buy and upgrade that one card that I really want (Poison), so currently, my answer to this question would be a “No”.

This could change though. Somewhere down the line, I could find myself in Legendary Arena. When that happens, the in-game shop would start carrying Legendary cards and I might see one that I really want. Legendary cards are extremely rare (I’ve been playing for months and have yet to get one) and expensive (one card costs 40,000 Gold in the shop). If/when that happens, my answer to this question may change to a “Yes”. But it’s a “No” for now.

Am I Buying Something That Will Improve My Gaming Experience?

This is another tricky question, but this is how I see this: my gaming experience would improve if my purchase would give me a significant advantage in the game or if it’s an additional feature that would be fun to play. Some examples of the former are these special DLC missions in Fire Emblem Awakening and Fire Emblem Fates which, upon completion, would give my characters loads of EXP and Gold. I didn’t think twice about that Boo Camp DLC map for Fire Emblem Fates – I’ll need that for grinding!

In Clash Royale, most of the in-game purchases would definitely give me an advantage. Spending Gems on Chests would mean getting cards without having to wait. Spending Gems on Gold would allow me to buy cards in the shop and upgrade cards as well, again skipping the wait needed to save up all that Gold. Even upgrading cards not in my main deck would be helpful – I’d be able to tweak my deck as I see fit, given that I have more card options to choose from. This question is a definite “Yes”.

Is My Purchase “Cost-Effective”?

Another tricky question, the answers to which are very subjective. Do I feel that I’ll get my money’s worth? The fighter DLCs in Super Smash Bros. (priced between $4.99 and $5.99 each) are all worth it, in my opinion, because I love Super Smash Bros. and I know that I’ll be playing all the fighters that I bought (either controlling them or fighting against them for practice). The custom fighter costumes however, aren’t, and this is simply because I’m not that fond of using the custom fighters in the game (I didn’t even bother looking up the price). But what about the purchases in Clash Royale?

Using Gems for Tournaments are a good deal, with the smallest Tournament that I can host comes at the very affordable price of $4.99. However, the minimum level requirement for Tournaments is Level 8 and there aren’t that many players in our clan who would be able to enter in case I hosted a private one (and I don’t want to spend money on an open Tournament). That leaves me with Chests (either directly buying them or speed-opening them) and Gold. I already talked about Gold and purchasing/upgrading cards above, so let’s cross that one out. 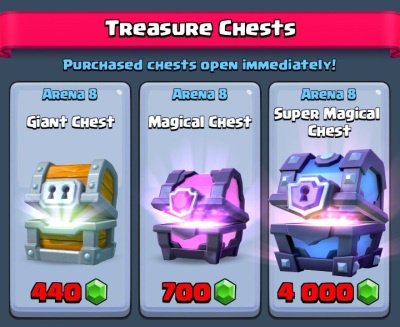 Prices for Chests vary depending on the Arena that you’re in.

Giant Chests and Magical Chests can be obtained for free and there’s a fixed cycle for this; I’m guaranteed to get four of each per cycle. Super Magical Chests are obtained randomly though and are rare (one out of every 500 chests). However, these chests have the highest chances of containing a Legendary card. But these are expensive – the cheapest way to get an Arena 8 Super Magical Chest and having the fewest number of leftover Gems is by shelling out $35 (buying each of the 500, 1,200, and 2,500 gem packages). Thirty five dollars is costly, and not only are you not guaranteed a Legendary card, you also don’t know what Legendary card you’ll get. You might end up with one of the less popular Legendary cards like The Log or Sparky. That’s simply too steep.

Similar to my second question, the answer to this is very situational. Is the shop carrying a card that I really want to have and I don’t have the Gold to buy enough copies of it? I might consider buying Gems for purchasing Gold then. There might be a time when I know enough players to finally want to host a Tournament. Or I might see a must-have card in the shop. My answer may change to a “Yes” for those times, but for now my answer is a definitive “No”.

Four questions, two answered by “Yes” and two by “No”. Based on my current needs and situation, I don’t think it’s worth spending money on Clash Royale. But again, this is based on “now” and it’s based on “me”. It might be different for someone else. Somewhere down the line, I may go through the same thought process and ask myself the same questions. Maybe my answers to these questions would be different by then.

And that goes for all micro transactions, in-game purchases, add-on DLCs, and the like, regardless of the game. I’d need at least three “Yes” answers before I pull the trigger on a purchase.

What do you think about micro-transactions in Clash Royale and in other games? Tell us about your experiences below!

5 thoughts on “Are Clash Royale’s In-Game Purchases Worth It?”